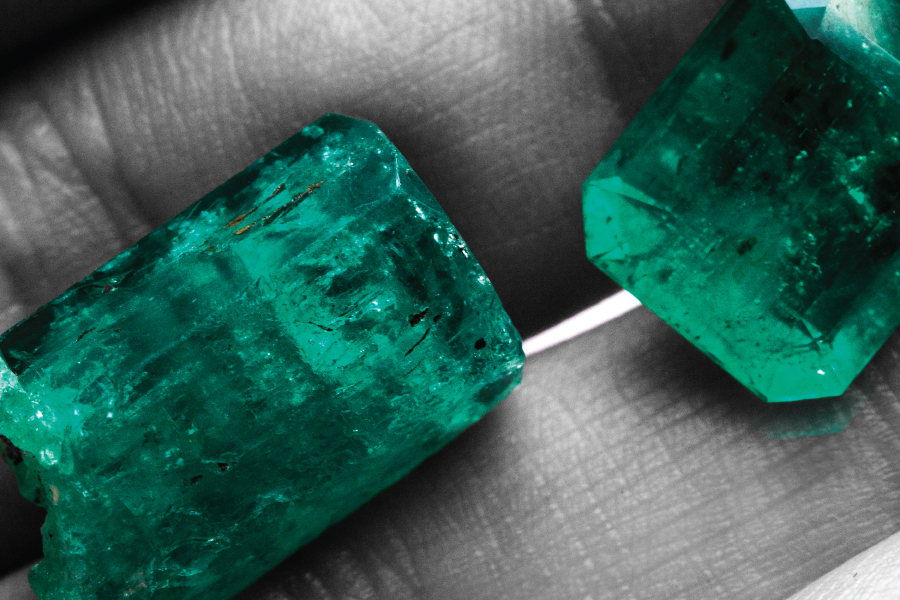 How Much Are Emeralds Per Carat

An emerald stone is a gemstone containing a deep, distinctly green colour. It is a member of the beryl family. Several locations around the world include igneous, metamorphic, and sedimentary rocks that contain them.

It has been known that emeralds have been one of the most valuable and desirable coloured stones for more than 5000 years. Several ancient civilisations in Africa, Asia, and South America discovered emeralds independently and made them precious gemstones. Many countries, including the United States, consider emerald to be the birthstone for people born in May. 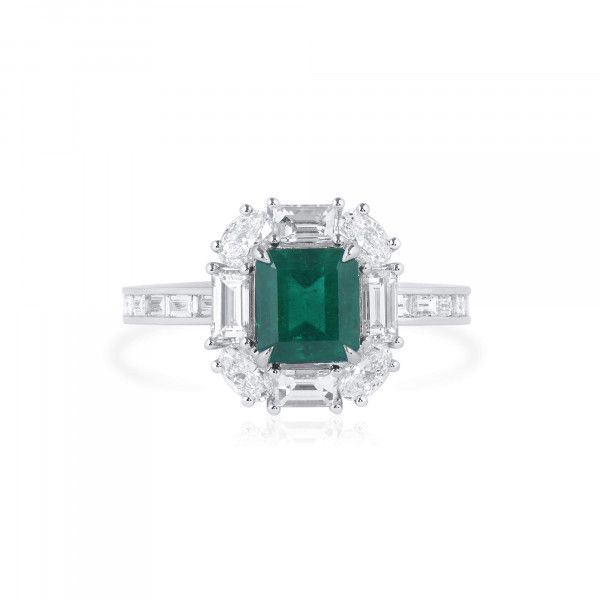 Emeralds are one of the most sought-after gemstones on the market, and they can be found in Colombia, Brazil, Pakistan, Russia, Afghanistan, and Zambia. A long and illustrious history can be traced back to the ancient Greek word "smaragdus", meaning green. Emeralds have traditionally been associated with growth, reflection, and balance.

It is believed that emeralds were traded in Babylonian markets as early as 3000 BC. Emeralds are said to confer great powers upon their wearers, according to Aristotle. The Egyptian emerald mines enthralled Cleopatra during Ancient Egyptian times, and she owned an extensive collection of emeralds.

According to Pliny the Elder's Natural History, emeralds are among the most precious gemstones. Spain plundering the New World for their use in the 16th century resulted in emeralds being traded for other valuable materials. Emerald engagement gifts have been worn by icons such as Elizabeth Taylor, Grace Kelly, Jackie Kennedy, and many more. 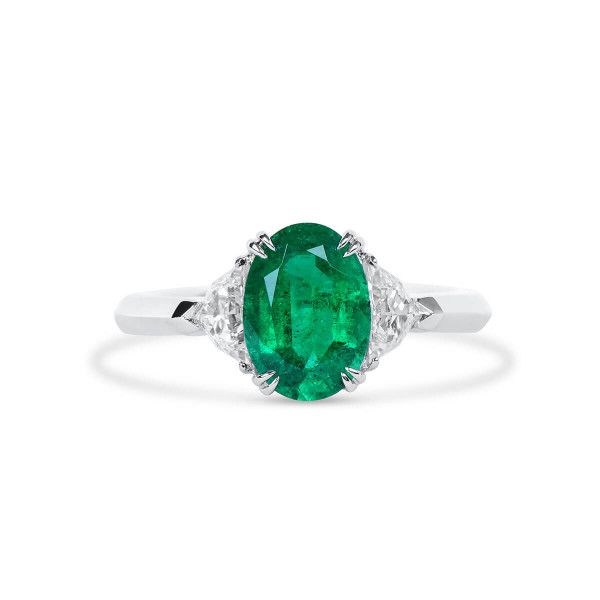 The Colour Green Of An Emerald

Among the emerald varieties of beryl, Be3Al2(SiO3)6 is the chemical formula. As a mineral, beryl is colourless when pure and is known as "goshenite." It develops a green colour when trace amounts of chromium or vanadium are present.

Green is the colour that defines an emerald. Emeralds are distinguished by their distinctive green colour that ranges from blueish green to green to slightly yellowish green. For a specimen to qualify as an emerald, it must also be richly coloured. In the case of stones with poor saturation or light tones, they should be called "green beryls." Aquamarines and heliodors are stones with greenish blue or yellowish green colours.

What is the difference between green emerald and beryl in terms of hue, tone, and saturation? Gem and jewellery professionals disagree on where the lines should be drawn. It is believed emerald should be used when the green colour is caused by chromium and vanadium.

A gem's price and marketability may be significantly affected by calling it an "emerald" instead of a "green beryl." American consumers are affected by this "colour confusion." Beryls with a green colour - no matter how faint - are considered emeralds in other countries.

Emeralds: What Is Their Value Per Carat?

The most valuable emeralds originate in the Colombian Muzo valley, where they are even rarer than diamonds. It depends on the quality of the emerald, but they can cost as little as $200 or as much as $18,000 per carat. Even the highest quality synthetic emeralds cost about $350 per carat, making them less valuable than natural emeralds.

In June of 2017, Harry Winston purchased the most expensive emerald ever sold per carat for $5.5 million for an 18.04-carat ring once owned by the Rockefeller family. An emerald sale like this one reflects the rising price of emeralds at the market, as well as the excitement and enthusiasm surrounding them.

The colour of your emerald has a tremendous impact on its value. There are three main qualities to consider when assessing the colour of an emerald: hue, saturation, and tone.

Emeralds are also valued according to the clarity of their stone or the number of flaws (inclusions) present within. Inclusions are present in most emeralds, but their location, number, and size will affect the value of the stone. Inclusions that negatively affect transparency lower the emerald's value.

It is important to note that the cut of an emerald can have a significant impact on its appearance, its durability, and its ability to reveal inclusions. Stones that are cut well will maximise their visual appeal, which will increase their value.

There are emeralds throughout the world, but some regions are known for producing precious stones. Colombian emerald, Zambian emerald, Brazilian emerald, and Zimbabwean emerald will command a higher price.

Artificial treatments are commonly used in the gem industry to enhance a stone's appearance. Embalms are among the most popular stones to be treated with dyes to enhance their colour and oil, wax, and resin to minimise their visible fractures. An emerald that has not been artificially treated is more valuable than one that has been treated artificially. 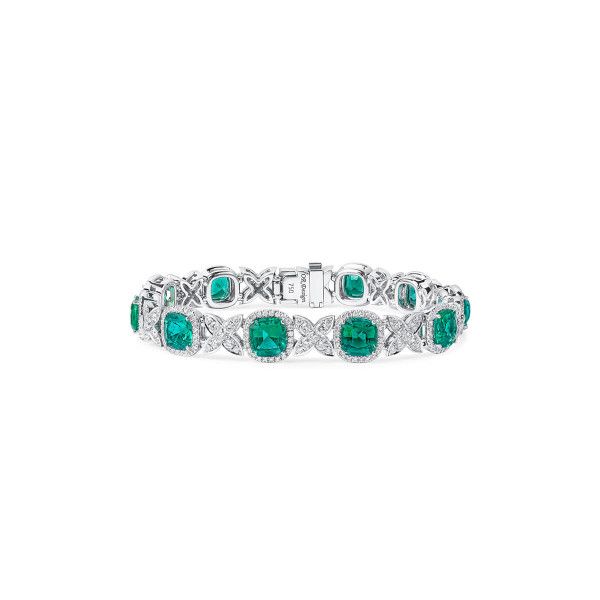 How Valuable Are Synthetic Emeralds?

It takes more energy and time to create synthetic emeralds, making them one of the most valuable synthetic gems. A synthetic emerald will usually have higher clarity than a natural one due to its chemical composition and physical properties.

As a result, they are significantly less valuable than natural emerald since they lack the individual character of inclusions. Among the 'big four' gemstones, emeralds are the second most expensive at an average price of $169 per carat, but quality varies significantly.

An emerald's value varies considerably based on its quality, primarily its colour and clarity - the more prosperous and more profound the colour, the more valuable it is, and natural stones are more valuable than treated ones. Emeralds are also more valuable per carat as they become more extensive.

What is the best way to tell if an emerald is good or not?

Blueish green to pure green emeralds is the most desirable, with vivid saturation and tone that isn't too dark. Emeralds with high transparency are the most valuable. There are no visible zones of colour, and their colour is evenly distributed.

What are the benefits of investing in emeralds?

The rarity of emeralds makes them an excellent investment, and their relatively low price makes them an affordable alternative to diamonds. Green is their most common colour, but it can come in a variety of shades. The value and appreciation potential of an emerald will increase if you buy a higher-quality one with no visible flaws.

Green is what most people predict when it comes to emeralds. Many times, however, their hearts are set on a much lighter stone! Most people prefer lighter gems to darker green gems with less brilliance because they reflect more light.

How does the emerald symbolise something?

There is no denying the mesmerising stone's soft green colour. Spring is synonymous with this rich colour, which is a symbol of hope, romance, and rebirth. Emeralds are also commonly believed to enhance fertility as the precious gem associated with Venus.

Does emerald have a higher rarity than ruby?

Emerald gemstone is the rarest gemstone, along with sapphires and rubies. The rarity of these stones is greater than that of sapphires, but it is not relatively as high as that of rubies. It is important to note that sapphires, rubies, and emeralds are far, far rarer than diamonds.