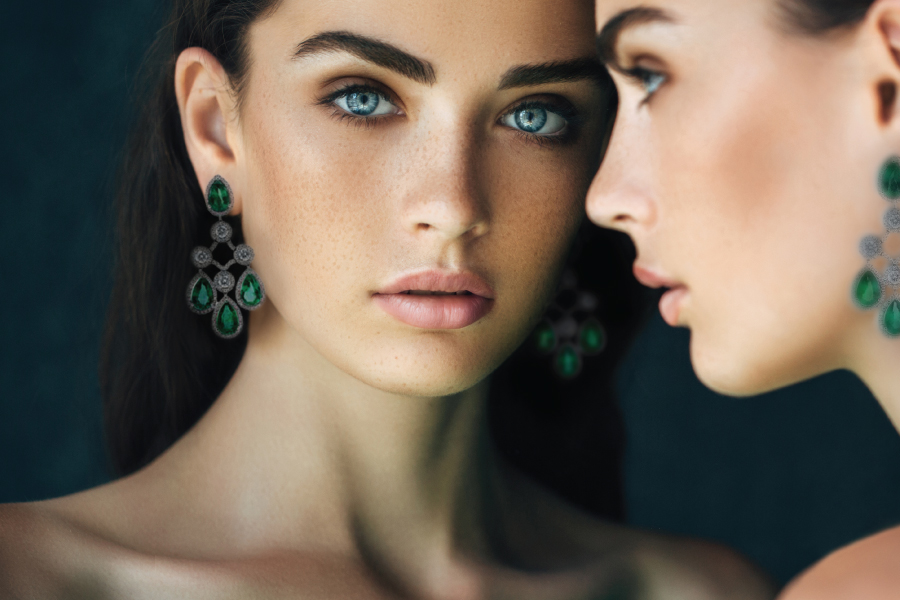 Emerald Jewelry vs Green Diamond Jewelry: The Differences You Should Know About

In the opinions of many a jewelry enthusiast, ranking high among the world’s most beautiful gemstones are green diamonds and emeralds. As both are so stunning to behold, it might seem like comparing apples and oranges to try and ‘pit’ one against the other. Especially as despite their differences, people appreciate the gems for quite similar reasons.

In professional terms it is usually things like the color, the shine, sparkle, brilliance, hardness, clarity, and price that are contrasted when comparing various gemstones. And this is indeed where the stones used in green diamond jewelry and emerald jewelry differ more significantly.

Differences in Composition and Strength

Emeralds are gems derived from beryl, a mineral (Beryllium Aluminum Silicate). Diamonds, on the other hand, are jewels formed of carbon.
In terms of hardness, the two gemstones aren't far apart on the Mohs scale. That is, although emeralds have a hardness of 7.5, diamonds have a hardness of 10.

Diamonds are hence tougher than emeralds. Emeralds, on the other hand, are neither hugely delicate nor too much softer than diamonds. In fact, emeralds are extremely resilient and can last for decades without cracking.

Even so, when comparing the two jewels (emeralds vs. diamonds), diamonds are unquestionably tougher.

The issue with cut emeralds are the inclusions that practically every emerald contains, which make them hard to cut and can make it seem like they are more fragile. Due to this aspect of the nature of emeralds, designers avoid making numerous cuts on the gemstone. That's why most emeralds have a "emerald" shape, which is a rectangular shape.

Cutting emeralds into specific shapes and designs is difficult even for experienced gem cutters. The scarcity of emeralds compared to diamonds adds to the anxiety and restriction.

Emeralds are extremely uncommon, and the last thing a designer wants to do is risk losing one by attempting to construct precise shapes.

The darker the green color of an emerald, the greater the value of the carat. Due to the scarcity of such gemstones, a perfect instance would be equivalent to tens of thousands of dollars per carat.

A diamond which is truly clear is valuable, but less rare. However, when you are talking about green diamonds things change. A pure green diamond is exceptionally rare, and even those that feature other hues are very scarce. So, a green diamond may be just as valuable.

The hue of either an emerald or a green diamond can affect its value significantly. Often green diamonds have a secondary color, or hue, which will change both its appearance and value. In the case of emeralds, it is usually the intensity of the green that makes a difference.

The sparkle of a gemstone is the product of several properties inside it acting in unison. Typically, the style of sparkle is limited to select stone ranges. Additionally, a green diamond’s surface adds extra scintillation to the sparkle. This immediately offers a higher-than-normal amount of sparkle for green diamonds.

The fact is that an exceptional emerald is not supposed to sparkle. Inside an emerald, there may be a slight fire effect when it is exposed to light, but if an emerald has a sparkle that is much similar to that of a diamond, in general, it is a sign of lower overall quality. So, if you like sparkle, green diamond jewelry is more likely to be to your taste.

The fact is that an exceptional emerald is not supposed to sparkle. Inside an emerald, there may be a slight fire effect when it is exposed to light, but if an emerald has a sparkle that is much similar to that of a diamond, in general, it is a sign of lower overall quality. So, if you like sparkle, green diamond jewelry is more likely to be to your taste. 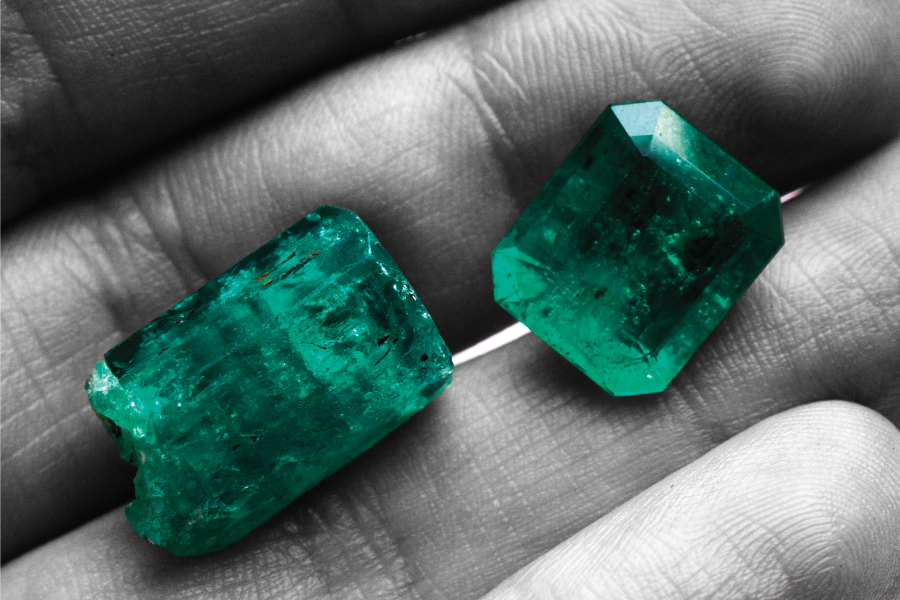 In the emerald vs. green diamond comparison, brilliance is one of the simpler things to calculate. The brilliance of a gem is an indicator of general levels of refractive index. The RI value measures, as the name implies, how well an object refracts light. The higher the RI value, the brighter a gemstone glistens.

The RI of green diamonds averages out around at 2.4. Emeralds are usually found with an RI of 1.57 to 1.58. So, on average, green diamonds have a higher RI value. But there are still some points to remember. If you value brilliance, then it is often easier to find in green diamond jewelry. Emeralds on the upper end of their brilliance range, meanwhile, are rarer.

Clarity refers to the degree of imperfections, or inclusions, within a gemstone. There will be some degree of inclusion of every naturally formed stone.

Usually, green diamonds have remarkably high clarity levels. Consequently, when there are any inclusions, they would usually only be visible under high levels of magnification.

Emeralds are the exact opposite. An emerald without noticeable inclusion is very unusual and will raise the gemstone’s total value instantly, and such examples are exceptionally rare.

These imperfections do not detract from an emerald's beauty either, they are 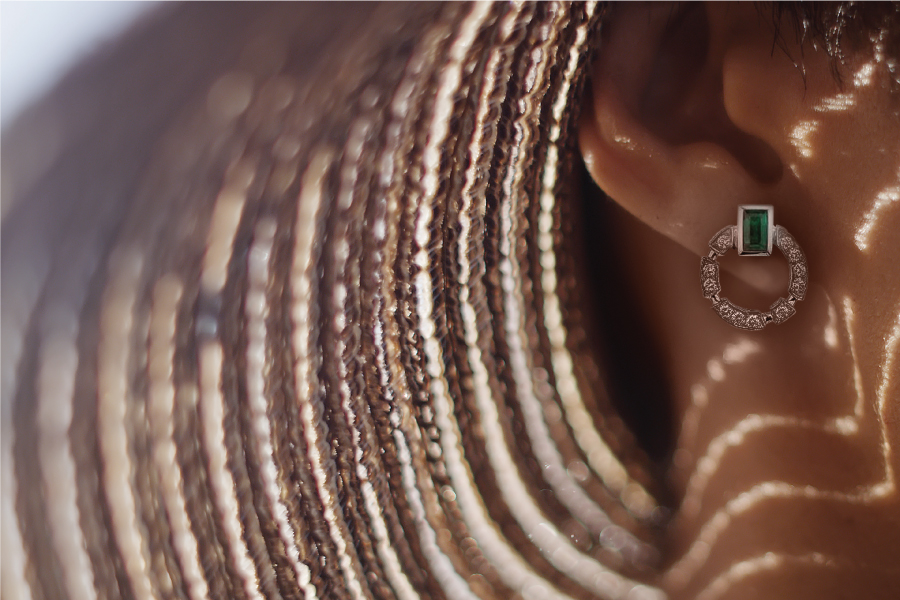 Differences in Price and Personal Taste

A green diamond jewelry piece is not inexpensive, but you can find reasonably priced pieces, given the rarity of such stones. Emeralds are priced according to some of the criteria we have described above and can be more affordable than green diamond jewelry, or almost as expensive, it really depends on the gem you choose.

If you are making the choice between emerald jewelry and green diamond jewelry to wear, however, it is likely that their appearance and perhaps meaning are most important to you.

Emeralds are rich and warm. They are usually associated, if you are a person who enjoys learning about the 'meanings' behind gems, associated with truth and long-lasting love, and is also the gem most closely associated with the goddess Venus. They are dramatic and make great evening wear.

Green diamonds are said to symbolize longevity, prosperity, and power. Their bright sparkle is hugely alluring and their lighter color suits them to daytime dressing more easily than the darker emerald might.

However, both a green diamond and an emerald are an excellent gemstone choice. This means that which you prefer is a very personal choice, meaning only you can decide the ‘winner’ in a comparison between emerald jewelry and green diamond jewelry, and, if you shop carefully, the choice you make will be the perfect one for you.