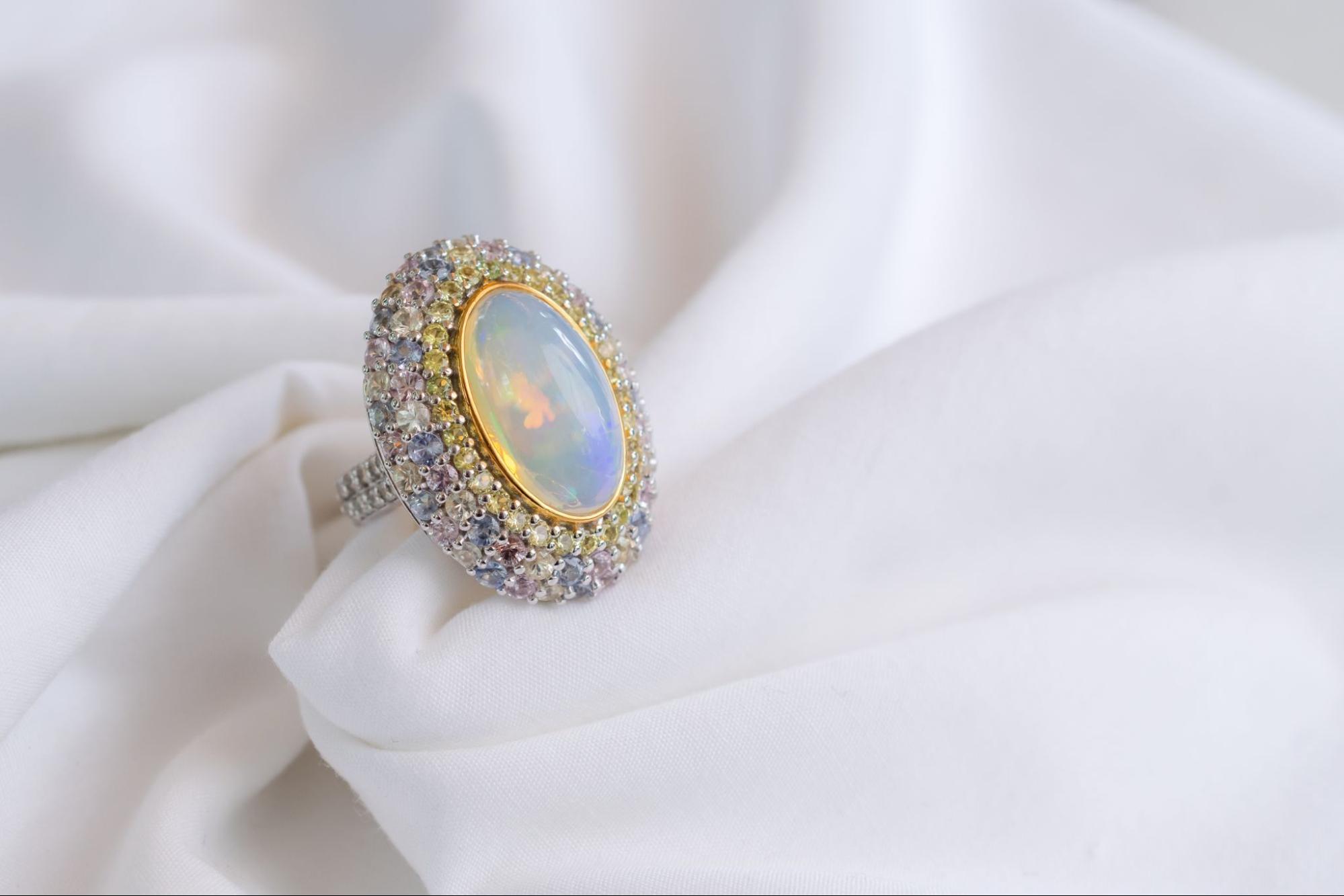 What Is The October Birthstone?

It is believed that this stone, the birthstone for October, originated in India (the place where the first opals were imported into the West), where it is called Upala, which means "precious stone." In ancient Rome, it was called opalus. Opals are prized for their shifting colour in rainbow shades - a phenomenon called "play-of-colour."

Writers have compared the October birthstone's play of colour to fireworks, galaxies, and volcanoes due to its dramatic play of colours. Opal was believed by the Bedouins to contain lightning and to fall from the sky during thunderstorms. Opals were believed to have the power to prophesy and to protect people from disease by the ancient Greeks. In Europe, opal has long been associated with purity, hope, and truth. The virtues and powers of all coloured stones were believed to be contained in opal hundreds of years ago. Also, opal is given as a wedding anniversary gift in the 14th year of marriage.

Opal: Where Can You Find It?

There are many places in the world where you can find the opal birthstone. Australia is home to the most fertile fields of the October birthstone in the world. There are also essential sources in Ethiopia, Mexico, and Brazil. The United States, Central Europe, Honduras, Indonesia, Madagascar, Peru, and Turkey are among the countries where deposits have been found.

Black opal is a prized gemstone found in Lightning Ridge, New South Wales, Australia. With little rainfall and scorching summer temperatures, Lightning Ridge is a dry, rocky region with little vegetation. Mine workers often live underground to escape the punishing heat because of the unforgiving climate.

Other types of October birthstones can also be found in Australia. New South Wales, South Australia, Mintabie, Andamooka, and Coober Pedy are the most common places to find white opal. Located only in Queensland, boulder opal can be found only there.

Wegel Tena in Wollo Province is the birthplace of Ethiopia's October birthstone. Miners pry opal from shafts dug into the side of a plateau 340 miles (about 550 kilometres) north of Addis Ababa. White, yellow, orange, brownish-red, and chocolate-brown coloured gems have been discovered here. Play-of-colour is visible in some opals. Black opal, orange, white, and crystal opal can also be found in Ethiopia's Shewa Province. This land is surrounded by cliffs that protect its treasures from the elements.

Among some of the excellent play-of-colour fire opals that come from Querétero, a state in Mexico, are yellows, oranges, and reddish oranges to reds. It takes a winding mountain road to reach the mines, which are surrounded by dense pine and oak forests, scrubby plateaus of cacti, and rocky outcroppings.

Cleaning And Care For Opal Birthstones

It is possible to impregnate opals with oils, waxes, or plastics. In doubles and triplets, an opal slice is glued to a base and covered with a thin dome of clear quartz. This October, the birthstone can be cleaned safely with warm, soapy water. Other cleaning methods might damage the opal or filler material. If opal doublets and triplets are exposed to water for a prolonged time, the adhesive may weaken. A sudden temperature change or high heat can also fracture the natural opal.

A Mohs scale of hardness of 5 to 6.5 is assigned to this October birthstone. Keeping the opal by itself will prevent it from being scratched by a jewellery set with harder gems. Some of the gems that can scratch the October birthstone include diamonds, rubies, sapphires, and emeralds.

October's birthstone is tourmaline. A crystal with multiple colours is called a toramalli, which is derived from the Sinhalese word for "stone with mixed colours." It has an array of colours that are unmatched by any other gem. The October birthstone has a colour palette for every mood. Perhaps that's why ancient mystics believed it could inspire artistic expression. There are several popular tourmalines, mainly pinks, reds, emerald and green-to-blue paraiba tourmaline, and emerald and green "chrome" tourmalines.

Due to its wide range of colours, tourmaline was often misidentified as other gemstones. For example, the "Caesar's Ruby" pendant in the Russian crown jewels is a red (rubellite) tourmaline. Green tourmaline crystals were discovered by a Spanish conquistador in Brazil in the 1500s, but they were mistaken for emeralds. Since the 1800s, tourmaline has been recognised as a distinct mineral species after centuries of mistaken identity.

There are various healing properties associated with different colours of tourmaline. It is believed that black tourmaline protects the wearer from negativity and increases self-confidence. Associated with compassion and gentleness, pink tourmaline embodies love. Courage, strength, and stamina are promoted by green tourmaline. The eighth wedding anniversary is celebrated with tourmaline.

There are various healing properties associated with different colours of tourmaline. It is believed that black tourmaline protects the wearer from negativity and increases self-confidence. Associated with compassion and gentleness, pink tourmaline embodies love. Courage, strength, and stamina are promoted by green tourmaline. The eighth wedding anniversary is celebrated with tourmaline.

Tourmaline: Where Can You Find It?

Brazilian tourmaline has mainly been mined from pegmatites in Minas Gerais for centuries. There are a multitude of gem minerals found in these underground magma intrusions. Pegmatites in Paraiba State, Brazil, produced electric green, blue, and violet tourmalines in the late 1980s. Copper, a colouring agent that had never been recorded in any other tourmaline, caused the intense colours. Mozambique and Nigeria also discovered copper-bearing tourmalines of the Paraiba type in the early 2000s. As a result of their vivid colours, higher colour saturation, and more incredible rarity, the best Paraiba and Paraiba tourmaline easily outrank other tourmalines in terms of price.

Pegmatite districts can be found in Southern California and Maine in the United States. Over the past century, large quantities of tourmaline have been extracted sporadically from these deposits.

Tourmaline was first commercially mined in California in 1898 at the Himalaya pegmatite, known for producing fine rubellite. During the period 1902 to 1910, San Diego mines sent 120 tons of gem rubellite to Imperial China to satisfy Empress Dowager Cixi's obsession with the vibrant colour. Tourmaline mining in California reached its peak after Cixi's death and the overthrow of the Qing dynasty in 1908. It is rare to find gem-quality tourmaline in San Diego County today.

Cleaning And Care For Tourmaline Birthstones

A tourmaline birthstone is hardness rated 7 or 7.5 on the Mohs scale and can be worn every day. Light and most chemicals will not damage these colourful gems, but heat can. A soft brush and warm, soapy water are the best cleaning methods for this October birthstone. Ultrasonic and steam cleaners should not be used.

Is There A Reason Why October Has Two Birthstones?

A birthstone list for each month was created by the National Association of Jewellers in 1952 to standardise birthstones. As styles and availability of stones have changed over time, that last has been modified. Many viewed October's opal as too feminine and questioned its durability due to its appearance. Tourmaline was added to the mix by the association. In recent years, opal and pink tourmaline have been selected as the October birthstones.

What Is The October Birthstone's Colour?

Unlike any other gem, opals play with shifting kaleidoscopic colours. It is difficult to express the beauty of fine opal in words because it is elusive and hard to describe. Volcanoes and galaxies have been compared to it, as well as fireworks, jellyfish, galaxies, and lightning.

In addition to pink (the accepted colour representing October's birthstone), tourmalines are found in blues, reds, greens, and high-end shades of red.

These two October birthstones may just inspire you to add them to your collection now that you know a little bit more about their history and where they can be found!

How do you describe the colour Libra?

The colours of Libra are pink and blue, which help soften one's presence and open the heart. Libra's personality is characterised by these pastel hues, which symbolise a calming breeze. Libra's sweet and loving nature is evoked by light blue, while clarity and balance are enhanced by pink.

Are there two birthstones for every month?

There is typically one birthstone associated with each month, but there are some months that have more than one birthstone. There is some confusion arising because there are a variety of options for some months. Still, the decision was made so that there were more affordable options as well as the more traditional, more expensive stones.

Is there a name for October babies?

Depending on when a baby is born in October, it will be a Libra (Sep 23 - Oct 22) or a Scorpio (Oct 23 - Nov 21). It is a sign of charm, love, fairness, and sincerity to be a Libra. Passion, loyalty, and bravery are characteristics of Scorpios.

What is the spirit animal of October?

Anyone born between September 23 and October 22 has the grey wolf as their spirit animal. There are typically seven or eight of them in a pack. They are loyal creatures.