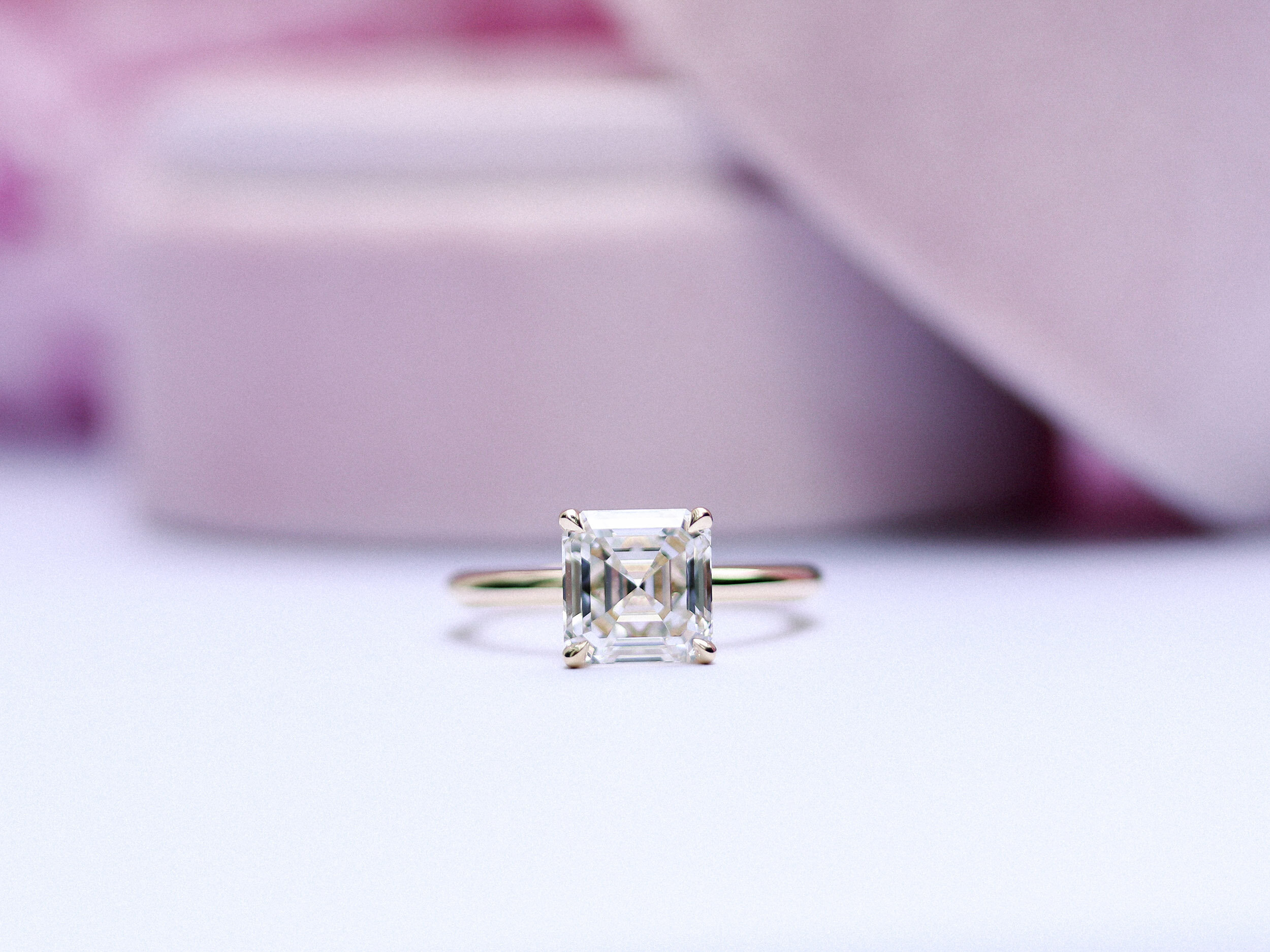 What is an Asscher Cut Diamond?

Asscher cut diamond is a square-shaped diamond with straight faceted corners and a 64-degree angle. The diamond shapes are often named based on their appearance: round brilliants, pear-shaped diamonds (sometimes called teardrops), oval diamonds, and heart-shaped diamonds.

A standout diamond shape, however, has nothing to do with its shape but bears a fascinating historical name. It's known as the Asscher Cut.

History of the Name of Asscher

Asscher Diamond Company’s founder Joseph Asscher invented and patented it at the time of its invention, hence its name. It was the first time someone patented a diamond cut.

Diamonds cut by the Asschers are among the most valuable and extensive worldwide. The Cullinan diamond, discovered in 1905, weighs a whopping 3,106 carats and is perhaps the most famous of its prestigious diamonds.

Joseph Asscher cleaved the Cullinan into three parts, guided by inclusions. One rough stone was cut into nine large stones. Cullinan, with 530.20 carats, is the largest diamond in Great Britain.

What Is The Best Way To Choose An Asscher Cut Diamond?

When choosing the Asscher diamond cut, it is essential to consider the following characteristics:

Colour imperfections cannot be hidden when fewer facets break up the light. If you plan to surround your stone with smaller stones, you will be able to find an exact colour match if you disregard anything below "G" on the colour scale.

VS1 or VS2 grades are best for keeping your piece's eye clean. Inclusions are allowed below this level of grading. A diamond weighing 1.5 carats or more with a VS1 or higher grading is the best choice.

To determine the quality of a cut stone, you must consider the stone's proportions. According to the length-to-width ratio (LW ratio), an Asscher Cut diamond has a square shape or is very close to one.

Asscher cut diamonds have a lower total depth, which means they are more brilliant: greater depth = more excellent brilliance. However, the whole purpose of an Asscher Cut is not to enhance brilliance but clarity. There is another principle that can be added to that: the shallower the stone, the bigger it appears.

The depth of a diamond is measured from its top to its culet, which is the lowest point when held upright. If you want a step-cut stone, you should stay within 60% - 68% depth because the more profound the stone, the more it will visually disappear into its weight, so if you buy a larger stone, you will feel like you need to make up the difference with a larger stone. Paying for the weight that you can't see can be a costly mistake.

If you wish to compensate for this, choose a stone with a shallower depth and a broader table. There is a term called "spread" that describes how large a stone appears as its spread increases.

The Most Popular Diamond Shapes

The Asscher Cut isn't the most popular diamond cut (round diamonds are), but if you want a unique look can choose from many other shapes.

A Comparison of Asscher and Princess Cut Diamonds

Princess diamonds and Asscher diamonds have predominantly square shapes in that their width and length are equal. It's mostly the corners that differ.

In addition to its sharp, right-angled corners, Princess Cuts have four sides, making it a perfect square. In contrast, Asscher Cuts have round corners that form eight sides of an octagonal shape.

The Cut Difference Between Asscher and Princess Cut Diamond

It is essential to understand that Asscher Cuts and Princess Cuts are different cuts. In Asscher Cuts, the facets are straight, with a larger table area, and the crown is higher. There is more fire and brilliance in Princess Cuts, called "Brilliant Cuts."

A Princess cut diamond shines brighter than a Step Cut diamond of the same quality. Asscher cuts are also better at masking clarity imperfections and yellowish tints, so you can often get by with slightly lower grades in a Princess cut.

The Price Difference Between Asscher and Princess Cut Diamond

A Comparison Of Asscher And Cushion Cut Diamond

While rectangular cushions are trendy among people, Asscher Cuts resemble a square. Their similar shapes make it possible to use them in many settings, depending on your preference. Their corners and the way they reflect light are the main differences between these two diamond shapes.

The Shape Difference Between Asscher and Cushion Cut Diamonds

Asschers and Cushions differ mainly in their corners. A straight angle on each side of the Asscher Cut gives the shape an octagonal shape. There are rounded corners on Cushion Cut diamonds. The outline may look similar from a distance, but you will notice the shape difference.

The Cut Difference Between Asscher and Cushion Cut Diamond

A cushion diamond is a brilliant cut diamond, just like a princess diamond. Light reacts differently depending on the facets. Compared to the Cushion Cut, the Asscher Cut provides slightly more brilliance.

The Price Difference Between Asscher and Cushion Cut Diamond

Cushions and Asschers are both similar in price. Because of their similar shapes, you get about the same visible size for your money as opposed to an Emerald Cut, which appears more extensive for the same carat weight. Because Asscher Cuts require a higher clarity grade to achieve the same eye-clean appearance, Cushion Cuts may be slightly more affordable.

The Asscher Cut diamond can reflect your inner essence just as gracefully as it can reflect the endless shimmer of the light that it reflects. Softness and clarity stand out because of their simple design, elegance, and restraint without embellishment.

For other information, you may visit us here! You can also have customised jewellery!

How much does the cheapest diamond cut cost?

Asscher and emerald cuts have the lowest carat-per-carat prices. With step-cut diamonds, there is less waste when cut from rough stones, which will remain the same price regardless of how they are cut.

Is Asscher good at cutting sparkle?

A diamond cut with an Asscher shape emphasises clarity instead of sparkle. Despite their sparkle, they don't compare to a diamond with a brilliant cut. The Asscher cut diamond is still incredibly glamorous and stunning despite not displaying as much sparkle as other diamond shapes.

How prevalent are Asscher cuts?

It is a popular choice for many women worldwide to have an Asscher diamond cut. You can choose an Asscher cut engagement ring shape according to your taste, but there's no denying these stones have a vintage appeal.

Royal Asscher Cut - what is it?

A royal Asscher cut looks square from above but has cut corners so that more light can enter the stone. An ideal length-to-width ratio is 1 to 104, which means they usually have 50 or 58 facets.