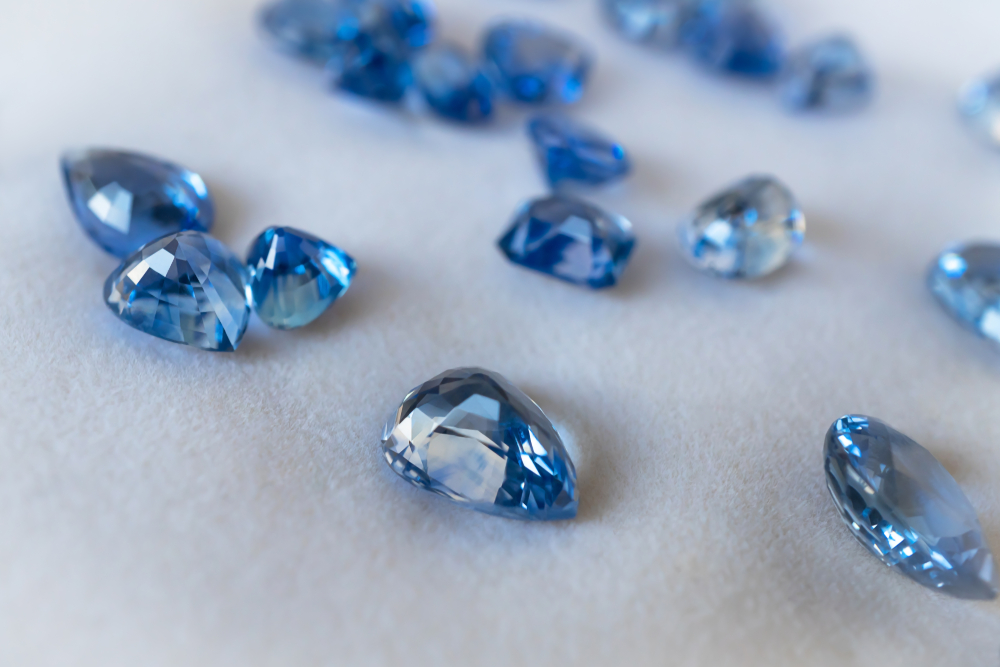 What is a March Birthstone?

Aquamarine gemstone is the most commonly recognised birthstone for March, but did you know that bloodstone is another birthstone for March? Both birthstones represent strength and perseverance despite their differences in appearance - perhaps fitting for the last month before spring! Would you choose a gem based on its value?

In this article, you will learn about the March Birthstones and other important information.

The month of March's two birthstones, aquamarine and bloodstone stones, differ significantly in appearance, but their reputation for promoting well-being is similar. Aquamarine gemstone symbolises the blue of the sea. Faceted aquamarines come in various hues, from deep green-blue to light, slightly green-blue. Aquamarines symbolise the purity of spirit and soul. Bloodstones are dark green cabochons with red spots of iron oxide, symbolising health and strength.

A birthstone is a gem associated with a particular month of the year, and each stone has its meaning. It's no secret who the most famous birthdays are, so when you ask someone, “What is your birthstone?” they know the answer. Often, birthstones are used in jewellery pieces like necklaces, bracelets, rings, or earrings to mark your birthday throughout the year. There are many kinds of birthday gifts and keepsakes that feature birthstones or the colours that represent them, making birthday shopping fun and easy. Wearing a birthstone has been widely believed to symbolise good luck and wellness since ancient times. Find out what birthstone you should wear.

Where Do Birthstones Come From?

The twelve gems in Aaron's Breastplate are associated with the twelve months of the year and the twelve signs of the zodiac by Christian scholars in the fifth century. During certain months or astrological alignments, each gem was believed to carry therapeutic benefits, and they would benefit from wearing it.

Each stone was given a different meaning and value for each month of the year so people could receive the full benefit. This practice eventually evolved so that the stone was worn only in the month of birth (hence the term "birthstone"). In 1912 Sears published a list of all the birthstones and the months they represented after much disagreement over which stone should represent which month. The list has primarily remained the same since then, with a few modifications here and there.

The gem was thought to calm waves and keep sailors safe at sea due to its Latin name, aquamarine, which means seawater in Latin. It was also believed that this March birthstone would bring happiness to marriages. People believed wearing beryl would protect them from foes in battle and litigation. Additionally, it was believed that it would make the wearer unconquerable, amiable, and able to think quickly.

The gem is given as a gift on the nineteenth wedding anniversary, as well as being the birthstone for March. A dark blue rectangular step-cut aquamarine weighing 1,298 carats (ct) was presented to First Lady Eleanor Roosevelt by the government of Brazil in 1936. 2.9 pounds (1.3 kilograms) - the largest stone - was faceted from aquamarine rough that weighed 2.9 pounds. New York's Franklin D. Roosevelt Presidential Library and Museum now houses the collection. Among the Smithsonian's most celebrated exhibits is the 10,363 ct (about 4.6 pounds) Dom Pedro Aquamarine, the world's largest aquamarine. In the fantasy cut technique, German lapidary Berndt Munsteiner fashioned the approximately 14-inch (36 centimetres) high obelisk.

The Best Place To Find Aquamarine

Minas Gerais is one of the world's largest producers of aquamarine and has been for over two centuries. Go travelling there, and you'll see a wide variety of landscapes: in the middle and east, there are rocky hills, rivers and scrub brush; in the west, there are savannahs, forests and streams; and in the south, there are lush green hills. Among the primary deposits of aquamarine in the state are pegmatites (hard rock) and secondary deposits (weathered pegmatites) near the gem centre of Teófilo Otoni.

The Karakorum foothills of Pakistan are also home to aquamarine. A steep path leads to elevations of 9,800 feet to more than 13,000 feet (3,000 meters to more than 4,000 meters), where miners work alongside forbidding cliffs. There are fertile valleys, rushing rivers, and small towns just beneath this inhospitable rocky world. Known as "clear water aquamarine," this mineral comes from this area.

Other African countries that mine aquamarine birthstones include Kenya, Madagascar, Nigeria, Zambia and Mozambique. Mount Antero is the state gem of Colorado, and Riverside and San Diego counties are the top sources of this mineral in the U.S. Besides the U.S., aquamarine has also been found in China, Myanmar, Russia, and Ukraine.

Jewellery Made From Aquamarine

It is durable enough for everyday wear thanks to its hardness of 7.5-8 on the Mohs scale. There is no need to worry about caring for the gem. Use a toothbrush to scrub behind the birthstone with warm water, mild dish soap, and mild dish soap. When a gem is free of fractures, and liquid inclusions, ultrasonic and steam cleaners are usually safe options.

Aquamarine can be considered one of the members of the beryl family, and its colour is caused by ferrous iron in minute amounts. Blueish green, blue-green, greenish blue and deep blue are some examples of aquamarine's colourations, and it is available in light and moderate tones. Larger stones usually have a more intense colour.

Heliotrope, or bloodstone, is a variety of chalcedony (cryptocrystalline quartz) with red inclusions of iron oxides, especially hematite, and is traditionally semi-translucent to opaque. In ancient times, bloodstones were believed to turn the sun red when placed in water due to their alternate name, heliotrope, which means "to turn the sun." Some believe that the pattern represents Christ's blood, hence the name bloodstone.

The March birthstone is said to possess several metaphysical properties. As a result, strength can be increased, invisibility can be granted, and health and youth can be preserved-modern athletes and women who want to grow their strength prize the bloodstone birthstone as a lucky charm. Indians still use fine bloodstones as aphrodisiacs today by crushing them into powder.

Its unique properties make bloodstone a favourite among many people, even though it does not have the same beauty as aquamarine, the March birthstone. Although some striking examples of bloodstones are faceted, they are usually cut as cabochons.

The Best Place To Find Bloodstone

In riverbeds and embedded in rocks, bloodstones are found as pebbles. Gems of this type are widely found worldwide, including in India, Brazil, Australia, and the United States.

Jewellery Made From Bloodstone

It is generally inexpensive to buy bloodstones. Two factors determine its worth: colour and the number of red spots. Prices tend to be higher for those with more red spots. The Mohs Hardness rating of bloodstones is 6.5 to 7, making them suitable for everyday jewellery, but they should not be stored next to harder stones since they may scratch.

A bloodstone is a type of chalcedony, a type of cryptocrystalline quartz, and its dark green colour depends on how much chlorite is present.

The most distinctive feature of a bloodstone is its dark-green colour with red spots. It is iron oxide that causes the red spots on the stone, which can resemble blood drops.

Wearing Birthstone Jewellery Has Many Benefits

There is one jewellery choice that you are sure to love: birthstones.  Each stone represents each month, and each stone is represented by a different piece of jewellery. Wearing birthstone jewellery has several benefits, and here are a few!

The history of gemstones is unique. As a result, blockages in the body, mind, and spirit were released. Many gem therapists believe that you connect to the earth's energy by placing these crystals on your body.

It is the same idea behind wearing birthstone jewellery. Additionally, they can act as a good luck charm to make you feel more relaxed and composed.

Good luck is believed to be bestowed upon you by your birthstone. Good fortune has been associated with gemstones for centuries. Wearing a piece of jewellery with a personalised birthstone works best.

Also, birthstones are believed to be protective against various dangers. Many believe it prevents nightmares, and others believe it can prevent natural disasters.

Wearing a birthstone can bring luck and protection, even though these theories have not been proven. You may not need much more than that sometimes.

2. An Intimate And Personal Relationship

Birthstone jewellery makes a great gift or addition to your jewellery collection. You can do this with yourself or with a friend. When people wear birthstones, they feel more grounded since they are associated with the time they were born.

You should always consider purchasing birthstone jewellery for your mom or your grandma because they will always appreciate it. Gifts personalised for her are an excellent way to express appreciation for her life.

Couples can do this with their children as well as showing affection for each other. Wearing your birthstones together can help you connect on a deeper and more intimate level.

3. An Expression Of Fashion

You can see an example of this necklace with October birthstones here. It's the perfect combination of minimalistic charm and subtle colour. Adding this simple detail to your outfits can elevate them to the next level.

In addition, birthstone jewellery is a great way to express who you are and how you feel. Many people can wear the same type of necklace, but wearing jewellery with your birthstone or that of a loved one is much more special.

Gemstones are used for healing as well as luck and protection. It may seem confusing to you at first. In recent years, crystals and gems have become more and more popular among healing experts due to their ability to attract positive energy into the body.

The energy released by this process is harmful and toxic. You might be familiar with alternative therapies that channel your energy levels and heal your body from the inside if you've ever done them or tried them.

Birthstones have their vibrations depending on their molecular composition. The same benefits can be obtained from this treatment as essential oils to improve mood, health, and mind.

The power of gemstones is also known to create a placebo effect in the body, no matter how sceptical you are about new-age elements. As comforting as healing itself, this can be as well.

Despite their religious origins, birthstones no longer have religious significance. Christianity seems to be their foundation. There is no way to ignore this historical significance; it shows that these stones have been durable and have a significant role in our lives.

The history of birthstone jewellery goes beyond historical significance. And it also has a personal meaning. Birthstones each have a special meaning that reflects the characteristics of the person born during that month.

There are many types of jewellery made with birthstones, all with different meanings. Even though most people tend to wear stones related to their birth month, others wear stones that have a special meaning to them.

Jewellery with birthstones has no rules. In this article, you will learn what each gem represents and how it can benefit you or someone you care about.

Do you have a March birthday? Your zodiac signs are Pisces and Aries. These pieces were made by jewellery designers, and we found some that you might enjoy. Bloodstone and aquamarine, the birthstones for March, are incredibly wearable, beautiful, and rich in lore. You now know what to look for in a jewellery piece that you will treasure for a lifetime.

Who are aquamarine rings suitable for?

March's birthstone is aquamarine, also the gem of the nineteenth wedding anniversary. Aquamarine is the zodiac stone associated with Saturn, worn by those born under Capricorn, Aquarius, or Aries. Virgo, Taurus, and Gemini are also suitable ascendants.

What chakra does aquamarine belong to?

Are aquamarine or amethyst the birthstones of Pisces?