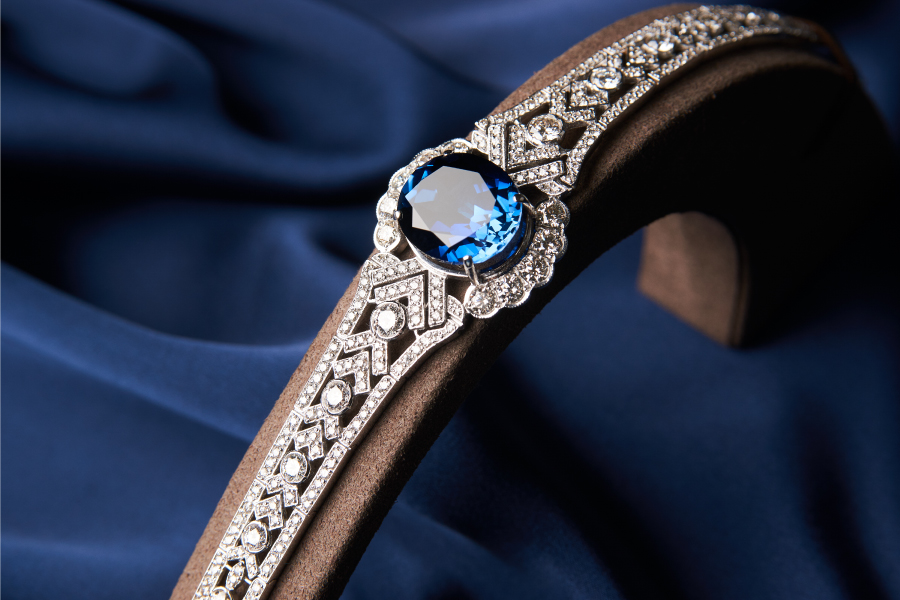 What is a Ceylon Sapphire: Everything You Need To Know

Ceylon sapphires (also known as Sri-Lankan sapphires) are blue sapphires that originate in Sri Lanka. They are distinguished by their excellent brightness, brilliance, and saturation. The beauty of a Ceylon sapphire is breath-taking. For over 2,500 years, Sri Lanka has been mining sapphires, earning the country a reputation in the industry.
There is a lot of rivalry in today's market between Ceylon sapphires and Madagascar sapphires. This has not deterred the popularity of gemstones from Sri Lanka in the market.
We'll learn more about Ceylon sapphires thanks to this article.
Let’s get started;

What's So Special About Ceylon Sapphires?

Ceylon sapphires were formerly known for their bright, medium-blue colours. With 90% of its landmass claimed to be formed of gem-bearing Pre-Cambrian rock, it possesses the most excellent density of gem deposits in proportion to its size.
Bright mid-blue Ceylon sapphires are highly sought after because of their unusual "cornflower" blue tone. Sapphires from this mine often have a lighter shade of blue than those mined elsewhere in the globe.
Ceylon sapphires are regarded as some of the world's best. The best jewels come from Kashmir, but the mines there have been closed for decades, so the area no longer has a steady supply of these precious stones to offer the market.
Burmese and Kashmir sapphires, in addition to Ceylon sapphires, are also well-known. Burmese sapphires are few and far between since the country’s ruby mines are the primary source. Sri Lanka is the only place where these beautiful stones are still being mined since manufacturing in Kashmir has almost ceased.

How To Identify a Real Ceylon sapphire?

Here are some basic strategies you may use to determine whether your Ceylon sapphire crystal is genuine or not.
The first step in confirming a Ceylon sapphire's genuineness is to look for flaws or impurities. Use a magnifying lens to check. Examine the sapphire's surface attentively for authenticity. If it is a natural gemstone, it will have minor surface defects due to natural development. While natural Ceylon sapphires are occasionally immaculate, the presence of minute impurities indicates it is a genuine stone. Ceylon sapphires without inclusions are commonly suspected of being synthetic or glass. Inclusions are visible to the naked eye in many cases but need 10x magnification in others.
A simple breath test may also verify the Ceylon sapphire's genuineness. Fogging a sapphire quickly identifies it. Keep track of how long the mist lasts. If it's a natural stone, the mist will dissipate quickly. On the other hand, synthetic sapphire crystals take a few seconds longer to vanish.
A Ceylon sapphire's refraction of light may also be used to assess its authenticity. Test the sapphire with a flashlight in complete darkness. If it is a fake sapphire (glass), you may see various colours in the crystal. Genuine sapphire stones reflect the light of the same hue.
While Ceylon sapphires are noted for their vibrant blue hue, sapphires mined in Sri Lanka come in a range of tints. Pink, yellow, green, and violet are possible Ceylon colours.
A pristine natural sapphire has only been sliced to create the wonder. Above the imitation, you will still obtain corundum. This is the natural, rarest, and most valuable gemstone. You may go to the source to find a genuine natural unheated sapphire in today's gem trade. 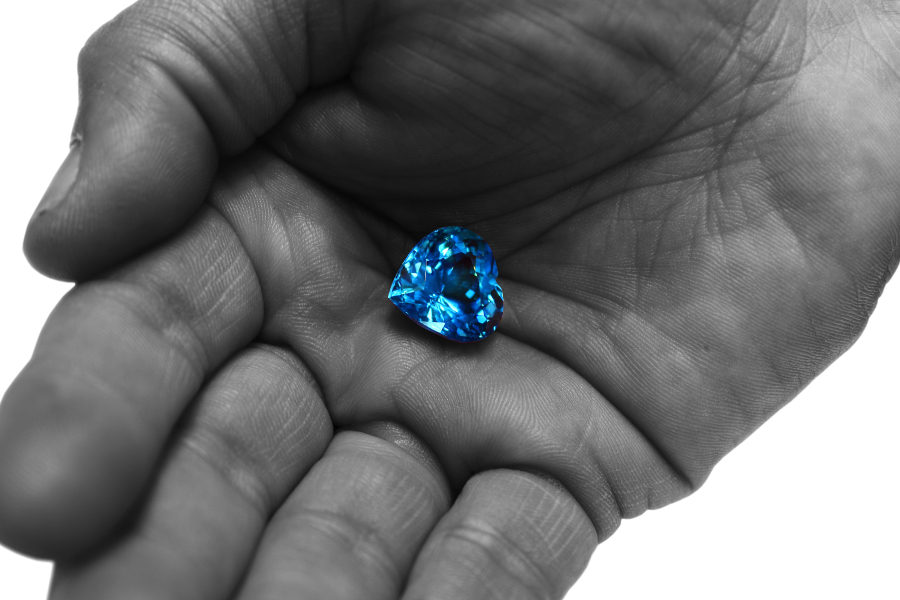 Sapphire prices can range greatly, depending on many factors. Sapphires can come as cheap as $25 per carat to over $11,000 per carat. A blue sapphire around 1 carat is likely to cost as little as $450 to $1,600, depending on quality.
The 4 C’s make a big difference in the cost of the stone, as do the region they originate from. Colour is the most significant factor in price. The most valuable sapphires are those with a powerful deep blue hue.
With that in mind, the result is that the price tolerance and price differences between one seller and another are more significant. Also, most Ceylon sapphires that you’ll see on the market are not certified, so it is harder to compare qualities or, in other words - compare apples to apples.
Some of the assumptions and parameters used concerning the 4 C’s and sapphire treatments are described below:

The cut of the sapphire is one of the most critical factors in determining its price. Ceylon sapphire cannot be shipped out of the nation in its raw condition unless it comes within the Gewda category, according to Sri Lankan government regulations governing sapphire trafficking. As a result, Sri Lanka is responsible for cutting and polishing 99 per cent of all Ceylon sapphires sold on the international market.

Colour is the most critical component in determining the price and your final decision on what to purchase. This investigation delves into the most well-known Ceylon sapphire colours. Sapphires of yellow and pink hues are the most commonly seen in Sri Lanka, followed by sapphires in the blue range. All of the other colours identified in this research are present considerably. The Ceylon teal sapphires, on the other hand, are relatively uncommon. However, they are in plentiful supply on the international market, coming from countries like Australia and Madagascar. 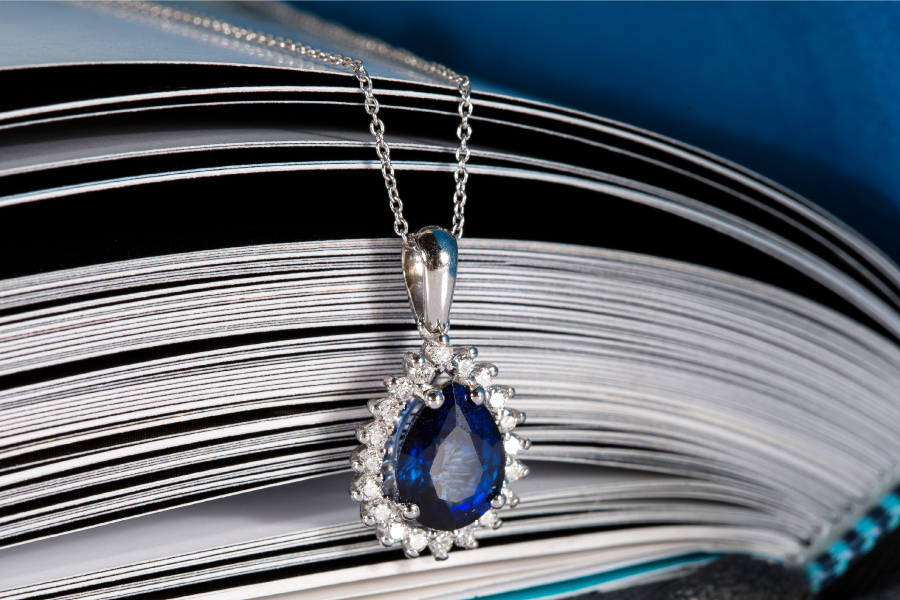 The clarity of a gemstone is a major determining factor in its price. Depending on how devoid of impurities, fractures, cleavage, and internal separation planes a gem is, it is said to have a certain degree of clarity. There are just a few naturally occurring sapphires that are internally perfect. Even those that are touted as so may only be marginally included.
Like those from other places, Ceylon sapphires tend to contain natural inclusions. The inclusions of the sapphires may be eliminated during the cutting process by a skilled lapidarist. A reduced yield will be obtained if this is done. Consider the distribution and visibility of any internal inclusions when pricing gemstones.

Top-quality Royal Blue Sapphire has a medium-deep blue to intense dark blue hue (without darkening) and excellent transparency, with no treatment whatsoever. This gemstone shines as a horoscope stone and as a piece of jewellery. Carat prices for Royal Blue Ceylon Sapphires start at about $4675 and may go upwards of $15500.

Cornflower Blue Sapphires are one of the most valuable and valuable gemstones globally. It is the highly sought-after colour variant of Sapphire that has a pristine blue tint akin to the colour of a cornflower. It may be found in a light to medium colour tone and originates from various sources, including Kashmir (India), Ceylon (Sri Lanka), Madagascar, and Myanmar, to name a few. Cornflower blue sapphire stone prices start at around $2320 per carat and may rise to over $6200 per carat in some instances.

Purple Sapphire (also known as 'Violet Sapphire' or 'Plum Sapphire') is a valuable gem type that ranges from blue-purple to purplish pink and is derived from the Corundum mineral family. According to astrology, this gemstone is considered the most potent kind of Blue Sapphire. Purple Sapphire is valued by the carat and may be purchased for as little as $4800 to as much as $15500.

Padparadscha is Sri Lanka's most elusive kind of sapphire. There are just a few types of sapphire, and this one is the rarest and most sought-after. According to legend, it was named "Padma-rats Chen," which means lotus bloom in the Sinhalese language. From around $615 per carat to over $7000 per carat, Padparadscha Sapphires are available in various colours and sizes. It is a rare kind of corundum gem. This padparadscha sapphire has a delicate pink-orange colouration mixed in with it. Today, Western gemologists classify padparadscha as a Sri Lankan sapphire with a beautiful pinkish-orange hue.

Star sapphires and star rubies are the most expensive and rarest gemstones of their respective kind. A peculiar optical phenomenon known as asterism may be seen in star sapphires. Tiny silk needles embedded inside the sapphire crystal reflect light and create a telltale star unique to sapphires. An unearthly feel may be seen in the changing star pattern that radiates inside them. While the most prevalent star pattern is a six-rayed star, star sapphires with four and twelve rays have also been discovered.

The Corundum mineral family includes pink sapphire, ranging from light pink to dark violet-pink. According to Vedic astrology, this gemstone has the same properties as the Ruby to attract good fortune. September's birthstone is Pink Sapphire, according to Western astrology.
Pink sapphires aren't as pricey as pink diamonds, but they're still relatively uncommon. Inclusion-free and exceptionally coloured untreated stones are pricey.
Pink sapphires may be purchased at a reasonable price. 1.48 carat pink sapphire from James Allen costs less than $1,800, yet a high-quality 1.5 carat round diamond can set you back $6,000 or more. 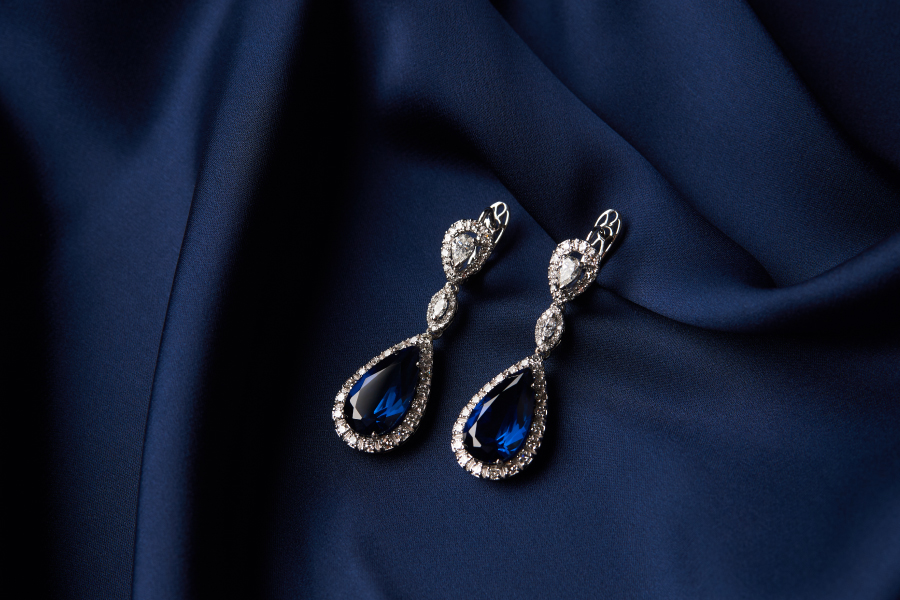 Are Ceylon Sapphires Almost as Desired as Diamonds?

Blue Ceylon sapphires have a Mohs hardness of 9, which is extremely near to diamonds, which have a Mohs hardness of 10. As a result, sapphires are highly sought-after jewels for jewellery, as consumers want long-lasting gems.
A gemstone's hardness grade indicates how easily it may be scratched.
Diamonds and sapphires can withstand extreme temperatures. To guarantee a long lifetime for your gem jewellery, consider a stone on the upper end of the Mohs hardness scale unless you only want to wear it on rare occasions.
Another reason these blue gems are so popular is their stylistic adaptability. Their deep, blue hue enables them to be surrounded by other kinds of smaller, dazzling stones, and they may be cut into different forms such as ovals, emerald shapes, and circles.
The beauty and elegance of a Ceylon sapphire are apparent, regardless of how it is cut or placed.
Although brilliant, colourless diamonds are the most common engagement ring option, many women are unaware that the stone is available in hues. Any colour of the rainbow may be found in a diamond.
Sapphires are comparable to rubies. While blue sapphires are the most common, the Gemological Institute of America notes that the stone may also be found in "violet, green, yellow, orange, pink, purple, and intermediate colours."
Diamonds may be the correct choice for you if you wish to cling to tradition with a classic piece of jewellery. Sapphires are an excellent alternative to save money on your engagement ring or other jewellery while still standing out from the crowd.

What is unique about Ceylon sapphires?

In the past, Ceylon sapphires were prized for their brilliant medium blue colours. However, there is a limited amount of high-quality gemstones available. As a result, it possesses the most excellent density of gem deposits in proportion to its area, with 90 per cent of the continent being formed of gem-bearing Pre-Cambrian rock, according to official estimates.

What type of sapphire is most expensive?

There is detail about Ceylon Sapphire. They're pretty uncommon and breathtakingly magnificent sapphires. They're often regarded as the best sapphires in the world.
So, what do you think of this article? Please do let us know in the comment section.