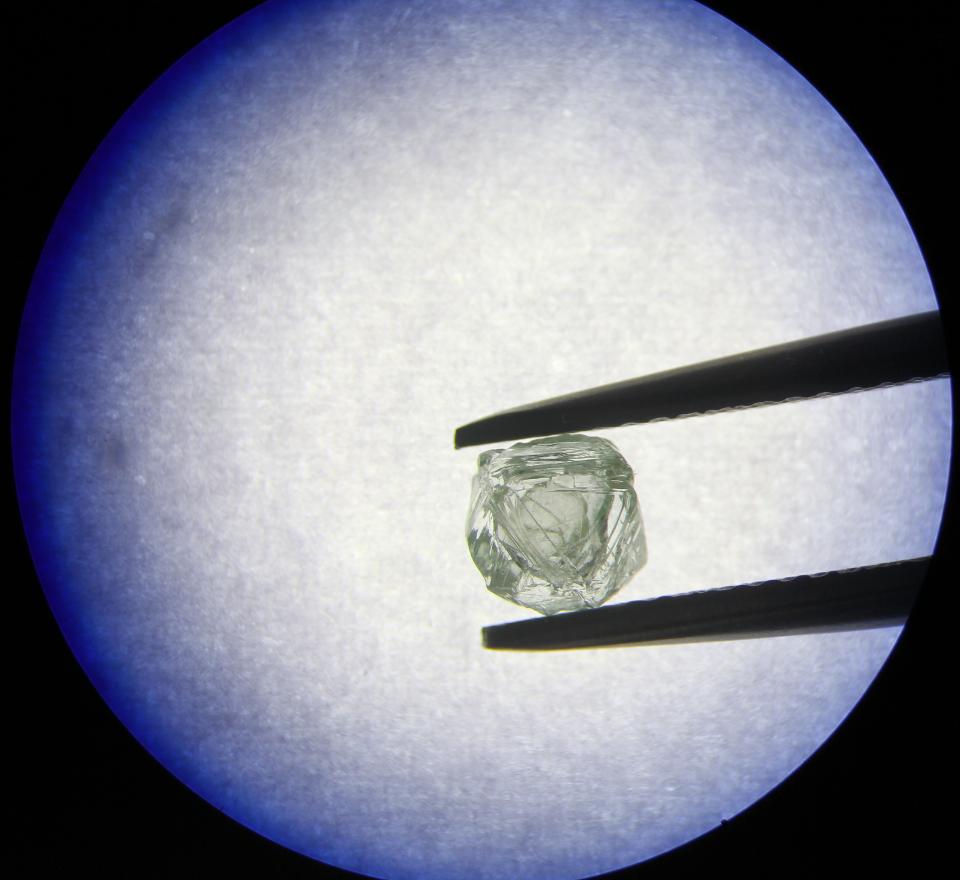 If there is one thing that those working in the diamond industry know it's that they've never seen it all. As every diamond is unique, there will always be something new, interesting and exciting on the horizon. And recently that has proved very true.

Alrosa is a Russian, partially state-owned diamond company that has been at the forefront of diamond mining for six decades, but never before has one of their diamond mining missions discovered something quite as rare and unusual as the Siberian diamond they recently revealed to the world.

Nicknamed the “Matryoshka” diamond - after those famous Russian nesting dolls - the gem is unique because it is the first-ever example of a diamond that has formed inside another diamond (thus the name.) You can see it 'move' in the video below:

The Matryoshka is a clear diamond, and it is not very large - just .62 carats and a little under 5mm in diameter. The internal diamond can be seen on x-ray, floating freely inside and is even smaller, just 1mm in diameter and approximately .02 carats.

The diamond was a 'lucky find', discovered by a worker who was sorting diamonds at a plant in Yakutsk, Siberia. The scientists employed by Alrosa to study their finds are not yet sure why the double diamond formed, but theorize that the smaller gem formed first and the second gem, for reasons they don't understand yet, 'swallowed' it as it formed.

The unusual double diamond was discovered while being sorted from other diamonds at the Siberia hub of Yakutsk. Speaking to the global media, one of the scientists, Oleg Kovalchuk, said “This is really a unique creation of nature, especially since nature does not like emptiness. Usually, some minerals are replaced by others without cavity formation."

The Matryoshka is not the only rather amazing diamond the company has had to showcase this year though. It was well known in the diamond industry that two years ago Alrosa discovered a huge pink diamond, a rare gem that was known to be a huge 27.85-carat clear pink rough diamond.

It was discovered in the company's mine in the Republic of Sakha and was then sent to Moscow for expert cutting and polishing. The result was the 14.83 carat 'Spirit of the Rose' diamond, a stunning sight and just one of ten pink diamonds of over ten carats that has been offered for sale over the past decade.

The most respected diamond grading body, Gemological Institute of America, has graded the finished diamond, which is named after a popular Russian contemporary ballet, “Fancy Vivid Purple-Pink”. They have also noted that it is the largest pink diamond they have ever graded and that, internally, it is flawless.

What's this stunning pink gem worth? Alrosa themselves won't put a price on it, but other industry experts estimate that a price in the region of $60 million would be the minimum it could be expected to command should it ever come to auction. Not the most expensive ever, as the highest price for a pink diamond paid at auction was for the 59.6 carat CTF Pink Star, which was sold at Sotheby's Hong Kong in 2017 for $71.2 million.

The size of the diamond is a hopeful sign for those who love pink diamonds though. The world's former richest source of the colored gem was the Argyle Mine in Australia, which is now exhausted. Alrosa has made it clear that they are ready to step in and that three of its mining projects are regularly producing colored diamonds, including the coveted pinks and blues that are currently so sought after, and a company spokesman said they expect to be able to satisfy up to 30% of the global colored-diamond market by 2020.

As for these diamonds, Alrosa says they will be announcing when and where the Spirit of the Rose will be sold soon. The Matryoshka, on the other hand, would be almost impossible to put a value on and will stay with them so that their science team can put in more work to try and discover just how such a strange, and rare, diamond came to be.