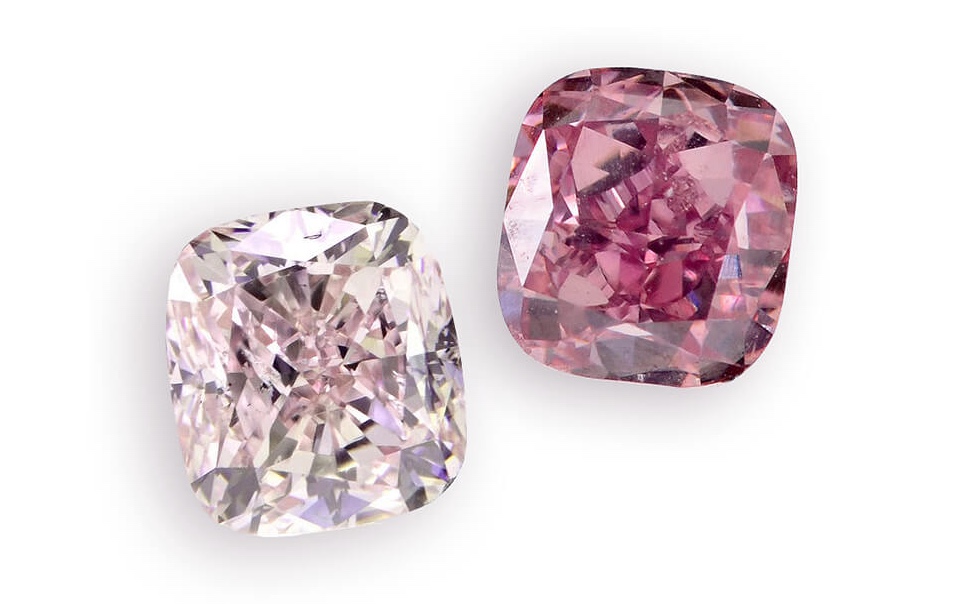 In recent years, pink gems have become increasingly popular. It's a pretty stone that makes a statement at the same time. It's hard to understand why this hue is so sought after among many other colour options and varieties. But we get it, it’s pretty and is so chic!

Want to know more about the meaning behind Pink gemstones?

Pink Gemstones: What Do They Mean?

Pink gemstones are often associated with love, affection, and the heart chakra, although their meanings vary. The reason for this is that specific colours can often trigger specific psychological reactions in us.

Type of Pink Gemstones and Their Symbols

Rose Quartz is an elegant gemstone with a delicate pink colour that can be transparent or translucent. Pink crystals with a milky appearance are more affordable, while those with an apparent star effect are more expensive.

It is said that rose quartz carries an energy of compassion and healing, as it is the stone of universal love. Love, romance, and calmness are the meanings of rose quartz.

Among the most popular gemstones is the sapphire, which is available in various pink shades. The rock is more complex than diamond and rarer than blue sapphire. There are a variety of shades of pink sapphire, from cool violets to warm peaches.

This pink gemstone is a good luck charm and a symbol of passionate love. In engagement and wedding rings, pink sapphires are famous because they symbolise trust, loyalty, and compassion.

Is almost like a raspberry. This garnet is a bright reddish-pink gem available in hot and rose pinks. It combined pyrope and Almandine Garnet in the stone.

Various properties of rhodolite garnet have been attributed to its ability to promote kindness, love, spiritual growth, compassion, and self-esteem.

Stones of garnet ‌represent life force, fire, and the heart.

Pink stones are a relatively new type of topaz that emerged in 1998. Natural topaz gemstones are coated with coloured film layers at the bottom to produce these pink gems. Darker or lighter pink gemstones can be created using a thin film deposition process.

Because of its connection to the heart chakra, pink topaz is believed to inspire and promote love. It is also believed that this colour of topaz symbolises eternity.

Gold Beryl, Aquamarine, and Emerald are all in the same mineral family as Morganite. It can be found in shades ranging from salmon to a very light pink, which makes morganite one of the most striking gemstones.

Morganite carries the exact meaning of romance, love, and harmony, as are many of the pink gemstones on this list. In addition to its soft pink hue, it's also associated with purity and innocence.

Pink opals originate in Peru, one of the world's rarest varieties. Light pink gemstones cost a lot less than pink gemstones with deeper colouring. There is a high demand for these hues because they are more stable and durable than precious opals.

Often called "The Stone of Resolution," a pink opal is said to relieve worry and anxiety, heal emotional wounds, and restore emotional balance. Love, kindness, and gentleness are also associated with this stone.

A classic addition to any statement piece, these pink stones, were named after Tiffany & Co's vice president George Frederick Kunz. There are shades of pink and violet available, but they should be kept out of direct sunlight to preserve their colour.

In terms of meaning and healing, pink kunzite carries the meaning of emotion. After a heartbreak, this pink stone is said to restore happiness and peace in your heart.

Pyrope and Spessartite Garnet make up this stone. Since it didn't fit into any of the categories available in the 1960s, it was seen as the outcast of garnets. In recent years, these vivid pink and peach shades have recently made Malaya garnets rare.

Generally, Malaya garnets represent rebirth and a fresh beginning. In addition to warding off evil spirits, Malaya garnets have also been associated with protection against negative energies.

A variety of colours are available in tourmaline, which is incredibly durable and versatile. From light pink gemstones to black stones and watermelon tourmaline, the shades range from soft to dark.

The meaning of pink tourmaline includes compassion, self-healing, and love. The stone is considered the perfect stone for people suffering from anxiety.

Because of carotenoid pigments in the water, calcium carbonate forms this pink gem. Besides white, the coral comes in many other colours, ranging from pink to red to purple. Beads or carvings are often made from them.

There's a common misconception that this pink stone is a sapphire or ruby. Magnesium aluminium oxide is used in its construction, and various colours are available. There is a direct correlation between the stone's size and its colour's vibrancy.

There is a revitalising effect associated with pink spinel. Chronic conditions can be alleviated with their properties, such as rejuvenating energy.

Because of the exhaustion of Madagascar's deposits, Pezzottaite is rare and nearly impossible to source. Since it resembles Beryl so closely, it is sometimes called Raspberry Beryl. It needs further testing to prove Pezzottaite, but they have found potential new deposits in Afghanistan.

Confidence and wisdom are associated with pezzottaite.

There is no doubt that this stone is famous for its distinctive pink and deep red stripes. There are endless pink-hued colour combinations, and the price reflects this.

There is an association between this stunning pink gemstone and love, motherhood, and romance. It's called "The Stone of the Compassionate Heart" because it's thought to promote happiness and optimism.

Diamond substitutes like zircon are popular because of their affordability, durability, and brilliance. Violet and orange hues are often found in pink stones.

There is a belief that pink zircon promotes confidence and helps you achieve your dreams and goals. Prosperity and success are associated with it.

There is an interesting fact about pearls - they are gems! The rareness of pink pearls makes finding one a challenge. It is undeniable that they are beautiful!

Good fortune, success, romance, energy, and fame are associated with pink pearls. For centuries, they have been considered a symbol of good fortune.

Among the rarer varieties of quartz, this one is precious. There is a parallel alignment of rutile in these pink crystals, creating a star-like appearance. When the light source moves, the star effect will also change. This effect is most noticeable under solid lighting.

You are said to be lucky in your love life if you wear Pink Star Rose Quartz. In legend, this gem possesses the energy of goddesses and angels.

There are few pink stones with better optical properties than this. People like it because it is often shaped like flowers, and they find it appealing. Additionally, it has been widely associated with folklore, making it a lovely addition to any piece of jewellery.

Pink moonstones symbolise new beginnings. Love, passion, and femininity are associated with it.

Smithson, who discovered Calamine comprises two minerals, one of which is Smithsonite, was the first to name this stunning stone after him.

The values associated with the Pink Smithsonite are compassion and forgiveness.

In contrast to rhodochrosite, pink rhodonite displays black tones instead of white. Pink gemstones boost your energy, keep you balanced, and help you reach your full potential.

Depending on the combination, Ocean Jasper is a multi-coloured stone available in greens, blues, reds, whites, oranges, pinks, or browns.

This generally pink gemstone's main characteristic is its circular, orb-like patterns on its surface. The Ocean Jasper is also known as Orbicular Jasper because of its appearance.

In addition to enhancing self-love and self-esteem, Ocean Jasper is believed to promote empathy for others. As a mood-boosting gemstone associated with the heart chakra, Ocean Jasper is often used to release negative feelings and feel more optimistic.

There are various shades of pink or purple-pink in Poudretteite, from colourless to very vibrant. Pink shades become more intense as the Manganese content increases.

Its pink gemstones are rarely used in jewellery because Poudretteite has a hardness of 5. The gemstone is valued for its one-of-a-kind glow and is one of the most valuable in the world. As a result of its extreme rarity, it is highly sought-after and not widely available. Most pink crystals are collected as collector's items.

Since ancient times, poudretteite has been used to cure mental illnesses. Pink crystals are believed to have healing properties and emit energy that has talismanic properties.

The pink-red colour of Rosolite gives it a gorgeous appearance. A colour like this has only been discovered recently - less than 30 years ago.

It shares many of the same characteristics as Garnet and is part of the Garnet family. While Rosolite is typically pink or red, it is lighter in shade than Garnet. Sierra de Cruces in Mexico is the source of pink gemstones.

Various vibrant colours are available, including pinks, reds, and fuchsias, as well as purplish-reds and deep purples.

The gemstone rubellite belongs to the family of tourmalines. The only Rubellites are those that have intense colours and high saturations. A durable and wearable gemstone, these red and pink gemstones are ideal for jewellery.

Passion is symbolised by gemstones with intense warm shades. With its energetic powers and connection to the heart chakra, Rubellite can increase stamina. Together with Black Star Sapphire, these vibrant pink gemstones are said to increase their power.

Colours like pink, brown, purple, and orange are available in Scapolite, which usually comes in a caramel-yellow shade.

It is not uncommon for rocks to have slight inclusions that create a silky lustre inside and reflect light, similar to a cat's eye. The stone sacapolite is relatively soft (hardness 5-6), so it is not used as a ring stone but as a pendant and chic earring. In addition to being a great collector's item, the rock is also an excellent investment.

The impurities in its structure can cause spodumene to appear in various shades, such as white, pink, grey, purple, light blue, green, and yellow.

Lithium-rich spodumene is a famous collector's gem, as well as one of the essential lithium sources.

Glass, steel, medicine, ceramics, and medicine all use Spodumene outside of the jewellery industry.

Known as Kunzite, the pink and purple varieties of Spodumene balance emotions and energise the wearer.

Additionally, pink gemstones are considered suitable heart protectors. Hiddenite crystals are ideal for new beginnings because they are green.

That's it! With their unique charms and healing properties, 25 pink gemstones enchant us with their beauty, glow, and mysterious power. Since ancient times, pink gemstones have inspired legends and been used in healing practices, making them some of the most treasured and sought-after jewels today.

Are there any pink gems you particularly like? Comment below to let us know what you think!

Here you can also find some gemstones!

How rare is a pink diamond?

In terms of rarity, pink diamonds are among the rarest of all diamond colours, but some are even rarer. A more intense and purer hue makes a coloured diamond more valuable, but size also matters.

Is it possible for pink sapphires to become cloudy?

Ruby is also known as star sapphire, along with sapphires. Because of the tiny inclusions known as Silk inclusions, the gems appear soft and cloudy.

How natural are pink diamonds?

There is no such thing as a fake pink diamond. 'Natural' diamonds refer to those that occur naturally with pink colouring and have not been treated in any way. A pink diamond's high price is primarily due to this rarity factor.