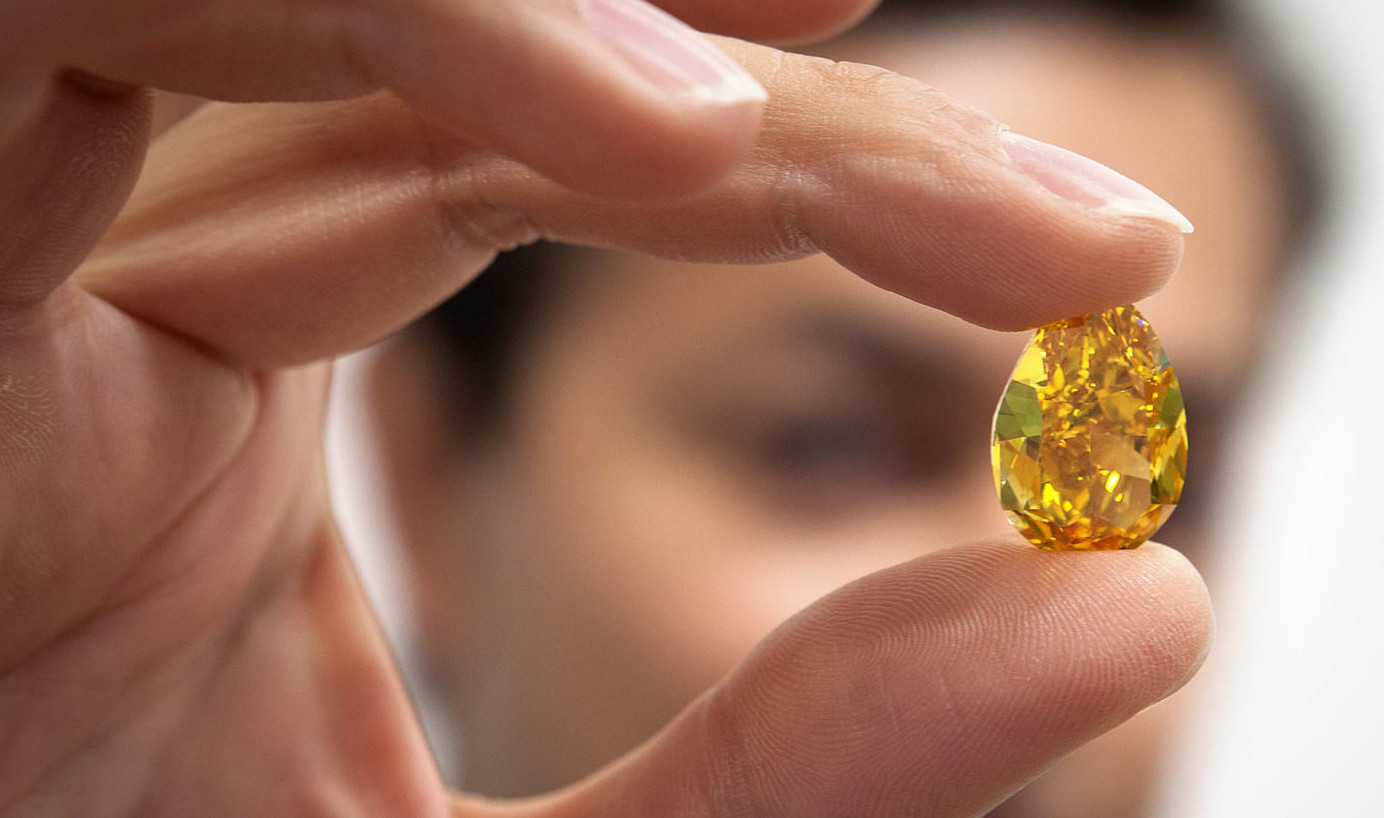 Ranging from vibrant orange to warm and mellow amber, rare orange diamonds – or “fire diamonds” as they are often called - are generally regarded as the most vibrant and beautiful of all the colored diamonds. Formed through a grouping of nitrogen atoms during the stone’s creation process, these stones are a favorite with diamond collectors and investors alike.

With our orange diamond education article, we’ll bring you all the information you need to make a knowledgeable decision, whether you’re a first time owner, or an experienced investor.
We’ll take you through all you need to know and more, about natural orange diamonds, including how they are formed, how they are graded, and how you can accurately determine the value of a stone before you make your priceless purchase.

How are orange diamonds formed?

The distinctive color of natural orange diamonds is created by the presence of nitrogen, the same element that give yellow diamonds their unique hue. However, while nitrogen is commonly present in nature, natural orange diamonds are formed through a rare process of nitrogen atoms grouping in a particular permutation during the creation of the diamond. If the conditions for this particular arrangement are present, the diamonds then absorb blue and yellow light, which on the color spectrum, come together to radiate an orange hue.

More rarely, when nitrogen atoms are consistently distributed throughout the carbon structure, the diamond absorbs green light as well as blue light. Such diamonds are called Type 1B diamonds, and have a darker color than Type 1A diamonds. Depending on the precise concentration and spread of the nitrogen atoms, natural orange diamonds come in a variety of overtones and intensities, from faint orange with yellow or brown as modifying colors, to Fancy Vivid or “pumpkin” orange.

Where are orange diamonds quarried?

Fancy orange diamonds are predominantly found in one of two places: Australia’s Argyle mines or the mines of South Africa.

The majority of orange diamonds are type 1B, indicating a scattering of individual nitrogen atoms consistently throughout the stone. Overall, less then 0.1% of diamonds are considered type 1B, which means that these stones are comparable to Type 2B diamonds for being the rarest kind. However, orange diamonds are less rare than some other natural colored diamonds such as blue, red, or pink diamonds.

What are “pumpkin” and “orangy” diamonds?

“Orangy” diamonds refer to diamonds with less than a 25% saturation of the color orange, which makes orange the secondary hue. The primary color for these diamonds is often yellow, brown, pink, or more uncommonly, the much sought after red. The price and demand for “orangy” diamonds depend greatly on the characteristics and value of the secondary color.

Natural colored diamonds represent excellent investment opportunities for several reasons: they are compact with a high size to value ratio, they don’t require registration as an asset, and most importantly, they’ve seen unprecedented valuations with exponential returns – in some cases up to 600% over the course of a decade.

The most lucrative investment choices are orange diamonds with intense color saturation and the highest carat that you can purchase within your desired budget.

However, diamond dealers and alternative investment professionals have noted recent trends that indicate the increasing desirability – and increased prices - of diamonds with mixed hues, such as brownish-orange.

The most accurate indications of pricing information for diamonds is typically through auction house records, and a key example of orange diamond valuations include “the Orange”, 14.82 carat pear shaped Fancy Vivid Orange VS1 pear sold at Christie’s Geneva auction in November 2013 for $2.4 million per carat. The diamond’s price tag of nearly $36 million shattered previous forecasts, which hovered around $20 million.

Orange diamonds for sale by Astteria 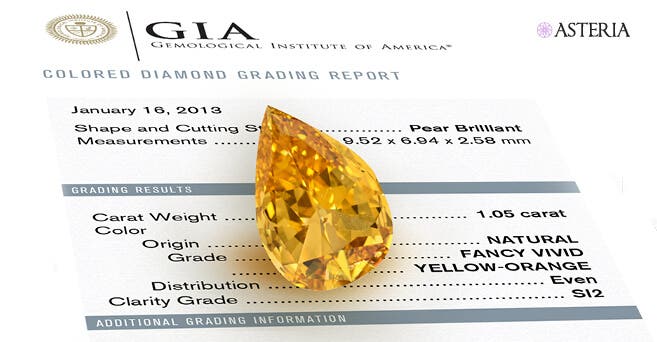 The pricing of diamonds – whether they’re colored or colorless - is based on four key parameters: Color, Carat, Clarity and Cut – the well-known 4Cs of diamond valuation. However, unlike with white diamonds, the value of a colored diamond is determined primarily by its color. The more dominant orange is as a diamond’s primary color, and the higher the intensity of this base color, the more valuable it will typically be.

At the end of the process, the color definition will be listed in the diamond’s official certificate of authenticity, an important consideration when purchasing a diamond to ensure that the value you pay for is the value you get. 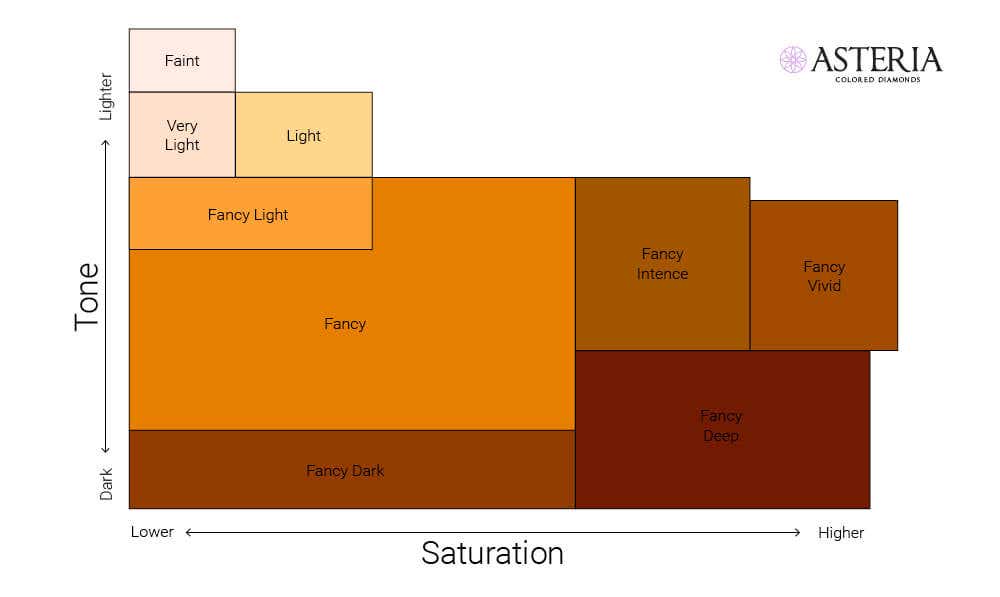 Hue represents the diamond’s dominant color, orange in this case. The hue value will be specified in the certificate for your diamond, accompanied by any lesser or secondary hues.

Saturation refers to the strength of color, or how much color is present and how intense it is. The further along this spectrum you go, the richer and more vibrant the orange is - and the richer a diamond’s color saturation, the more it will be worth. Thus, a Fancy Intense orange diamond will be worth more than a Fancy orange diamond.

Tone refers to the penetration of light, or lightness or darkness of an orange diamond, which make affect the perceived intensity of the diamond’s color. Thus, to the untrained eye, a Fancy orange with a darker tone can be mistaken for the more valuable Fancy Intense orange. The levels of tone are divided as follows - Very light, Light, Medium light, Medium, Medium dark, Dark, Very dark.

Speak to our diamond experts for post and pre sale valuation services.

The intensity color grading of a diamond is based on a combination of saturation and tone, and represents the color’s strength and vibrance. The intensity of a diamond’s hue greatly affects it’s cost and demand. The more intense the color, the rarer the diamond. 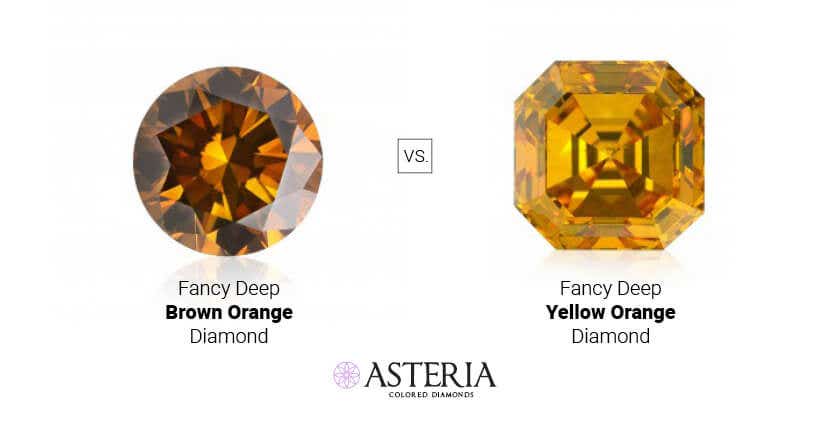 How do fluorescence and color distribution affect the value of orange diamonds?

Fluorescence is a natural phenomenon that is present in up to one-third of diamonds, and which causes them to glow when exposed to ultraviolet light. Typically, this appears as a blue glow, but can also occur in yellow, orange, and green. In orange diamonds, the glow typically appears as a medium to strong yellow, lending a golden luminosity to the stone and making it look more pastel.

While color is the primary factor influencing the pricing of diamond, the other 3 C’s - Carat, Clarity and Cut – are also important considerations.

Carat – The carat parameter refers to the diamond’s weight. 1 carat is defined as about 0.2 grams, or 100 points. In general, pricing by carats is higher for heavier diamonds compared to a lighter diamond with the same values of clarity or shade.

Natural Fancy orange diamonds generally tend to have clarities that fall within the VS1 to I1 range. While lower value orange diamonds may fall below this range, the vibrance of the color can often hide even major flaws that would be otherwise visible to the naked eye. Thus, it’s important to ensure you get a professional, personalized valuation before investing in a colored diamond.

Cut - refers to the way the diamond is polished to best flatter its natural qualities, maximize its color, augment its sparkle and make it look larger than it’s actual carat weight.

Round cuts – which are popular with white diamonds due to their tendency to reflect white light and enhance sparkle - tend to lower the perceived intensity of the color and make the saturation appear fainter. Thus, orange diamonds, like other colored diamonds, are generally cut into pear, radiant, cushion, or other unconventional shapes, which reflects less white light and work to enhance the intensity of the color.

The exceptional rarity and high price of these wonderful gems has led to a huge and unsatisfied demand for natural orange diamonds, which the market cannot meet. As a result, a niche of treated orange diamonds has emerged. Prepared in laboratory conditions, these diamonds attempt to imitate natural stones and provide a cheaper, artificial solution.

Treated orange diamonds are in fact white diamonds sent to the lab to undergo a chemical process or HPHT (High Pressure High Temperature) process in order to create pressure so great that the color of the diamond’s shell artificially changes to orange while its interior remains white.

If you insist on getting a rare and natural orange diamond, make sure it has a certificate of authenticity issued by a recognized gemological institute (such as the GIA) or get one issued immediately upon receipt to confirm that the diamond’s declared values match test results.