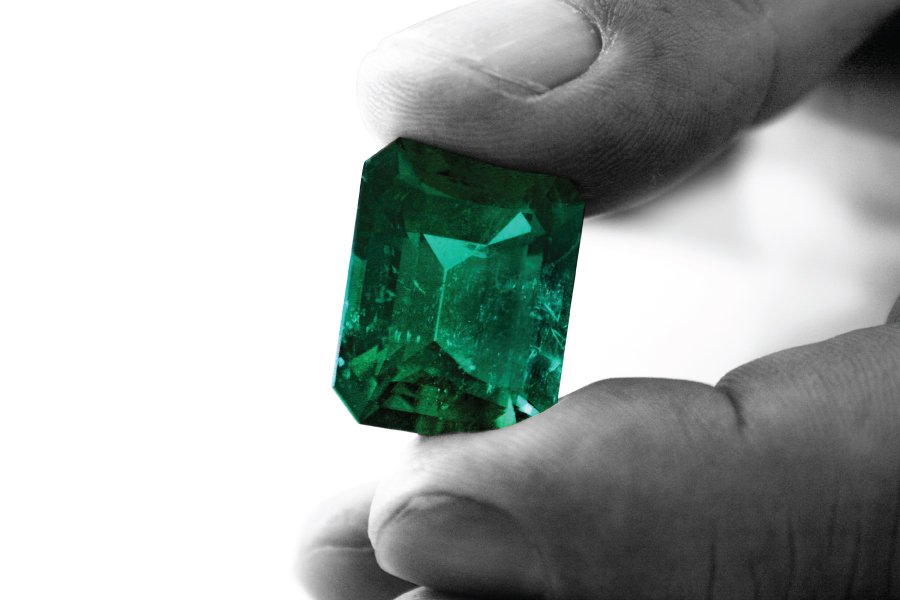 What You Need To Know About Men's Emerald Rings

More and more men are taking a cue from the past - from the times when men wore far more jewelry than women, and used it to showcase their personal style and well as prosperity and social standing - and investing in gemstone jewelry not for their wives, girlfriends or significant others, but for themselves.

One very popular choice is a men's emerald ring. They are indeed a great choice if you are considering making an investment in fine men's jewelry, and here are just some of the very good reasons why as well as a look at the long and storied history of these green beauties and just what you should keep in mind when shopping for men's emerald rings.

Emerald is a form of the mineral beryl, which is recognized by its stunning green tint, although that green can be found in many different hues. It has trace levels of chromium and, on rare occasions, vanadium, which gives it its brilliant color. The 'big three' of colored stones includes emeralds, rubies, and sapphires, but for many men the 'neutral' appeal of green is what draws them to it specifically.

This magnificent gemstone gets its name from a Persian word for green, "smaragdus," which was later altered to "emerald" over time. The emerald, the most valuable stone in the beryl group, continues to captivate the world with its luscious green color. Emeralds are excellent gemstones for a wide assortment of jewelry, with a Mohs hardness grade of 7.5 to 8.

Thanks to the fact that they are relatively hard, a properly set men's emerald ring is more than suitable for everyday wear for those guys who have an office job or don't work with their hands a great deal. If subjected to rough treatment, an emerald will crack more easily than a diamond, so for those who engage in a lot of physical work a man's emerald ring may be best reserved for special occasions.

Emeralds that are naturally perfect are incredibly rare and costly. Emeralds with minor defects are frequently favored over perfect ones because they are seen to be more authentic. The treatment of emeralds with oil or manmade lubricants to improve clarity has been standard procedure in the industry. 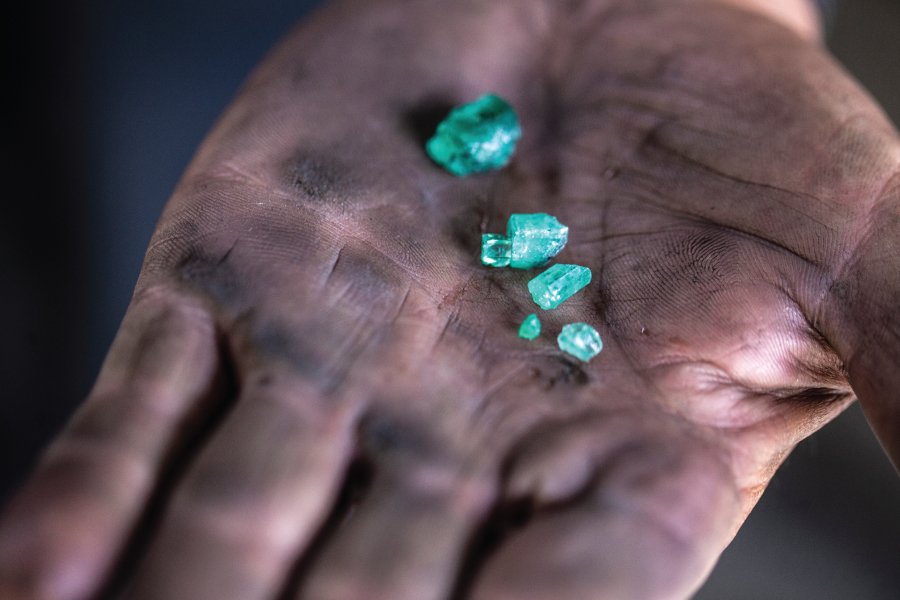 Emeralds have intrigued ancient civilizations in Africa, Asia, and South America since they were first unearthed. The world's oldest emeralds are found in Zimbabwe, whereas Colombia is the best-known modern source for the 'deep green' form of this gemstone. Brazil and Zambia are also well-known for producing high-quality emeralds.

Ancient Egypt boasted the first known emerald mines, which date from at least 330 BC to the 1700s. Cleopatra was well-known for her love of emerald, which she lavished across her regal adornments and was said to offer frequently as gifts to those she particularly favored.

When Spanish explorers invaded the New World in the sixteenth century, they brought back emeralds from what is now Colombia. For 500 years, the Incas had used emeralds in their jewelry and religious ceremonies, and the explorers helped themselves to plenty of them.

However, they did not, it seems, really appreciate what they got. Emeralds were traded for precious metals by the Spanish, who valued gold and silver significantly more than stones. Their trade brought the majesty of the emerald to the attention of European and Asian rulers and the quickly gained global popularity, among those who could afford them at least.

There are plenty of strange legends surrounding emeralds, too. When emerald was placed under the tongue, legends claimed that the wearer would be able to see into the future, expose truth, and be protected from bad spells cast by others. Emerald was formerly thought to be a cure-all for ailments such as cholera and malaria. Wearing an emerald was thought to disclose if a lover's vows were true or false, as well as making one an eloquent speaker.

What to Look for in A Men's Emerald Ring

What should you be taking into consideration if you are shopping for a men's emerald ring? While ultimately you should make your choice based on which of them appeals to you the most personally, here are some things to be on the lookout for to help you ensure you get the best men's emerald ring for you. 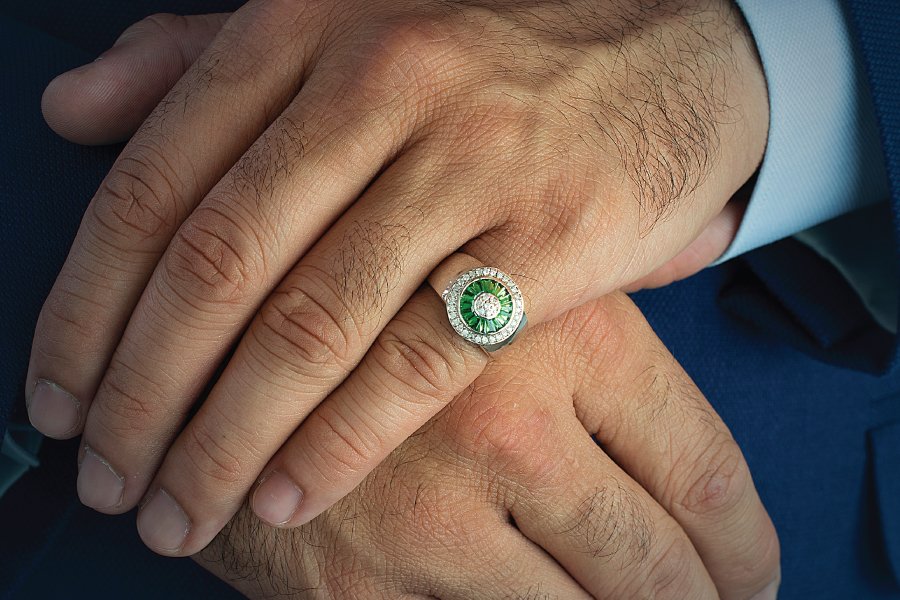 The presence of chromium and vanadium in emeralds gives them their distinctive color, which is, as most people know, green. While other gemstones can come in several colors - blue and pink sapphires for example - an emerald is always green.

That green alone has inspired many throughout the ages. Pliny the Elder of Rome characterized emerald in his Natural History, which was published in the first century AD: "...nothing greens greener." "There is no greater means of recovering their eyes than by glancing at the emerald, its soothing, green tint calming and relieving their weariness and lassitude," he said of early lapidaries' usage of emerald. Even today, the color green is said to alleviate tension and strain on the eyes.

As for what might be the 'perfect' hue for an emerald, that is harder to pin down. The actual color of an emerald is usually influenced by three different factors:

This relates to the gem's hue, or more specifically, the tint/shade of green that it has. The most valuable emeralds are usually bluish-green in color. However, stones with pure green and vivid green hues that have a uniform color dispersion are very desirable too.

The degree of darkness or light visible on the gem is used to assess this particular factor. Natural emeralds come in a range of colors, from pale to medium green. Those with medium to dark tones are usually the most popular.

Saturation refers to the color's power or intensity, which can range from bright to dull green. Fine emeralds have a moderate to vivid saturation.

Emeralds come in a range of shapes and sizes. Cushion, round, emerald, and princess are all common shapes. Emeralds can be cut into any of the common diamond shapes.

The main distinction is that emeralds have a higher carat weight at the bottom of the stone than diamonds. This means that the top facet and millimetre size of a diamond of the same carat weight will appear slightly smaller.

In terms of clarity, emeralds are expected to have inclusions. Each genuine emerald has its own individuality because of these inclusions. A skilled gem cutter will examine exactly where these inclusions are and then work with them to ensure they enhance, rather than detract, for the final appearance of the stone in a men's emerald ring.