Lab-Created Ruby: A Guide To The Stone of Infinite Color

Introduction: What is a Ruby?

Ruby is a gemstone that was named after the ancient Greek name for the island of Ceylon.
Ruby is one of the most popular gemstones in the world, and it's been used for centuries for its lustre and beauty. It is one of the best choices when choosing a perfect engagement ring.
Ruby is a variety of the mineral corundum, which is a mineral that has aluminum oxide as its main component and is also the second hardest material on Earth.
The word ruby comes from the Latin word "rubens", which means red. This natural gemstone was once very rare and expensive. Today, it's still considered a precious stone and can be found in many different colours, including pink, yellow, green, and black.
Ruby comes from many different sources, but it's usually mined from large deposits in Myanmar, Sri Lanka, Thailand, India, and Africa.

Ruby gemstones are typically red, and they are the second most popular gemstone after diamonds. The name ruby is derived from the Latin word "ruber", which means red.
The history of ruby gemstones dates back to ancient times. The Egyptians believed that rubies were tears of the gods, and they used them as offerings to their deities.
In ancient Rome, people believed that rubies had healing power and could protect them from evil spirits. Rubies have also been used as a symbol of royalty because they were considered to be one of the most valuable gems in history.
The earliest records of rubies are from the Neolithic period and from prehistoric India from around 3000 BC. The Romans were the first to recognise the economic value of rubies and to use them as a symbol of power, wealth, and good luck.
Rubies were traded through Central Asia until they reached Europe in the late 1500s.

What is a Natural Ruby? 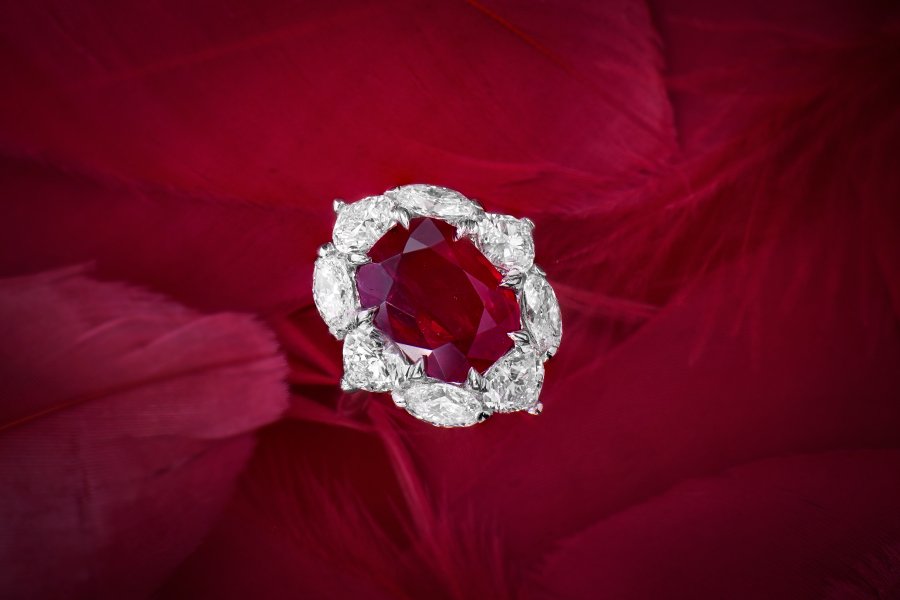 What is a Lab-created Ruby?

Lab-created rubies are created in a lab and not mined. They are created by heating aluminium oxide, which is the same material that is used to make glass.
Lab-created rubies have the same chemical composition as natural rubies, but they are grown in a lab. They can be grown in any colour and cut into any shape that you desire.
Ruby is the birthstone for July, and it symbolises love and passion.
Synthetic ruby, also known as lab-grown, is made by scientists by using various techniques to create the material from chemicals and minerals. There is no mining necessary because the new material can be created in a lab.
The first process for creating these synthetic gems is to create a slurry of liquid materials and then spin it in a centrifuge to separate out the material. The liquid is then heated and decomposed into carbide, iron oxide, and silicon dioxide.
The second technique for creating synthetic rubies is by using high-energy lasers that vaporise crystals of molten material, which are condensed into droplets. The droplets are then solidified and cut into crystals.

Ruby is a gemstone that is typically mined from the Earth. There are different kinds of rubies, but the most common type comes in a dark variety called "pigeon blood" or "red" ruby.
On the other hand, natural rubies are mined from layers of ancient volcanic rock and crystallised under high temperatures and pressure.
Lab-created rubies are grown in a laboratory using various techniques, including gas diffusion and plasma techniques.
The most valuable red rubies come from Burma, Thailand, Sri Lanka, and India.
The most famous mines are the Mogok in Myanmar, where rubies have been mined since 2500 BC; Pegu in Myanmar and the Ratnapura region of Sri Lanka; Singora near Chumpon in Thailand; and Gol Conda in India.

How Are Lab-Created Rubies Made?

This article will explore the history of rubies, how they're made today, and how lab-created stones compare to natural rubies.
Lab-created rubies are not just a new idea. The term "laboratory-created" is used to describe the process where manmade rubies are produced by a synthetic process. This process usually uses materials such as Alumina, Sodium Carbonate, and Fluorite in powdered form.

The gemologists do the process of controlled processes in rubies. It is done to find out if the ruby is a natural ruby or if it has been treated or enhanced by any other means.
It is done by using a microscope and looking for inclusions. The gemologist can also use other techniques like a spectroscope, refractometer, and polarising microscope to find out if the ruby has been treated with heat or any other means.

The process of artificial ruby formation is a process that occurs in the earth, specifically in the mantle. This process begins with a mineral called chromite. The chromite is then heated to high temperatures, which causes it to release hydrogen gas. The hydrogen gas then interacts with other elements and minerals, including aluminium, calcium, and titanium. This interaction produces an array of different minerals, including corundum, sapphires, and rubies.

Flux is a process that occurs in rubies. It is a type of colour change that happens when the light hits the stone. Flux is typically seen as a pinkish-red colour, but it can also be seen in other colours such as yellow, green, and blue.
The ancient Romans first used the term flux to describe this type of colour change in gemstones. The word comes from Latin "fluxus", which means flowing or flow.

Ruby is a gemstone that belongs to the corundum family. Ruby is a mineral of aluminum oxide (Al2O3) with trace amounts of iron and chromium. The colour of ruby depends on the trace elements present in it; for instance, if chromium is present, then the colour will be red.

The growth process for ruby occurs in two stages:

The hydrothermal process is a geological process where hot water or steam comes into contact with rock, usually granite. It is the process by which rubies are formed.
The hydrothermal process starts when the magma cools and crystallises to form igneous rocks. These rocks will have cavities in them that are filled with water that has seeped through cracks in the rocks. The hot water or steam comes into contact with these cavities and heats up the water inside these cavities, causing it to dissolve minerals from the surrounding rock. These minerals will then be deposited on the walls of these cavities as they cool down, forming crystals of various colours.

Ruby is a natural gemstone that is used in jewellery. The process of manufacturing a ruby starts with the mining of gemstones. Rubies are mined from the earth, and then they are sorted by quality. After this, they are cut to reveal the red colour inside them. The final step in the manufacturing process is setting the stone into jewellery.

The crystallisation process of rubies is a complex process. It is the simultaneous growth of crystals from molten material. This process can occur in two ways, either by cooling the molten material or by introducing a seed crystal that will grow into larger crystals.
The crystallisation process in rubies is a natural phenomenon, and it takes place in the earth's crust. The process begins with the magma that is heated to a high temperature.
The magma then cools and solidifies, forming new minerals. Some of these minerals are more stable than others, and so they form at lower temperatures. These minerals will be more abundant in the magma as well because they crystallise more easily than other minerals.

How to Know if a Ruby is Natural or Lab-Created

This is a question that many people ask themselves. In order to find out, one must know how ruby is made.
Ruby is made by melting aluminium oxide, which is then cooled and shaped.
This process can be done in two ways:
1) by using natural aluminium oxide or 2) by using lab-created aluminium oxide.
If the ruby was created with natural aluminium oxide, then it will have a slightly yellowish tint to it and will not be as clear as the lab-created ruby. The colour of these natural gems will also change depending on the type of light it's being exposed to. If you shine a flashlight on a natural ruby, it will turn green because of the light reflecting off of its surface. Aside from colour, carat weight and clarity must also be considered. 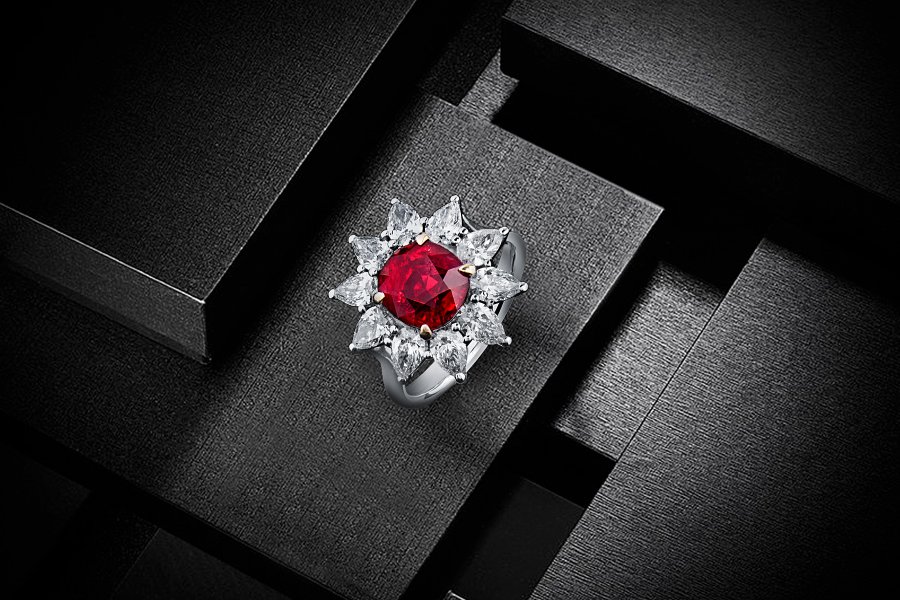 Is Ruby a Sapphire? is ruby also a kind of sapphire

Ruby is a gemstone and a variety of the mineral corundum. It gets its name from the Latin word "ruber", which means red. Ruby is known as one of the four precious stones, along with diamond, sapphire, and emerald.
No, ruby is not also a kind of sapphire. Sapphire is a gemstone that belongs to the mineral corundum family, and its examples are yellow sapphire, white sapphire, and star sapphire.

Should I buy a natural ruby or a lab-created ruby?

Where to buy Rubies?

Rubies are the most popular gemstone in the world. More than 90% of rubies come from Madagascar and Tanzania. Rubies are also found in other parts of the world like Myanmar, Sri Lanka, Pakistan, Afghanistan, Canada, and Russia.
There are many places where you can buy rubies. You can find them at jewellery stores that sell loose stones or those that specialise in gems and precious stones. You can also go to gem shows or visit a gem mine if you want to see how they're extracted firsthand.