How You Can Buy Diamond with Bitcoin (And Why You Should)

Satoshi Nakamoto, the mysterious creator of Bitcoin envisioned it as a medium for daily transactions when it was first released. The goal of a decentralized cryptocurrency was to remove government entities' centralized control over money and ensure quick transaction processing. In short, to give people back the control of the money they earned and the freedom to buy things they wanted - like diamonds for example - when and how they wanted.
Bitcoin and other smaller cryptocurrencies got off to a slower start in terms of transactional use than was first envisioned. However, recent Bitcoin technical advancements, like the Lightning Network, have the ability to restore Bitcoin to its original vision. As Bitcoin's technology and name awareness have improved, the number of places that accept it has grown. Bitcoin may be used to purchase a surprising variety of items. So if you have ever wondered if you can buy diamond with Bitcoin, the answer is yes.
In comparison to other payment systems, Bitcoin is meant to provide customers with a unique set of benefits. We'll look at them in more detail later, but first, let's review what Bitcoin, the cryptocurrency, is all about. It will be easier to grasp the benefits of utilizing Bitcoin for payments - including choosing to buy diamond with Bitcoin, if you understand Bitcoin's basic design principles.

What Is Bitcoin and How Does It Work?

Bitcoin is a decentralized, peer-to-peer cryptocurrency that performs transactions using bitcoins, which are digital units of trade. Since its inception in 2009, the Bitcoin network has dominated and even defined the cryptocurrency space, seeding a legion of altcoin loyalists and serving as an alternative to government flat currencies such as the UK pound, US dollar or the euro.
Bitcoin's decentralized nature, in which it is not managed or regulated by a central authority, is part of its appeal to these advocates. This sets it apart from fiat currencies, which are backed by the government and issued by central banks. Fiat currencies are also dispensed into a specific economy via institutions like banks, which are controlled by government rules.
Bitcoin, on the other hand, does not rely on governmental regulation for its creation and distribution. Bitcoin transactions are processed by a private network of computers linked by a shared ledger. Each transaction is stored in a "blockchain" on each computer, which updates and notifies all accounts at the same time. The blockchain acts as a distributed ledger, eliminating the need for a central authority to keep track of such information.
But why should that matter? People are very used to using their bank based checking account, credit cards or money wire services to pay for everything, so why use Bitcoin? And why buy diamond with Bitcoin instead of with, say, your credit card? Let's take a look

Traditional fiat currencies are vulnerable to a number of constraints and vulnerabilities. Banks, for example, are prone to economic booms and busts. As has happened in the past, these scenarios can sometimes result in bank runs and crashes. This implies that users do not have complete control over their funds.
Bitcoin guarantees user autonomy, at least in theory, because its price is unrelated to specific government actions. This means that bitcoin users and owners have complete control over their funds.

Transactions in Bitcoin are Anonymous.

To identify the individual executing the transaction, most internet transactions demand a slew of data. Transferring money from one person to another, for example, can only be done once both parties' identifying information has been validated. Similarly, making an online transaction necessitates entering identifying information. Although the verification procedure helps in preventing crime, it also puts a middleman in command of the transaction, permitting them to regulate the distribution of funds to specific parties.
Transactions in Bitcoin are anonymous. While this does not make the transactions fully anonymous, they can only be traced back to a blockchain address. For a single account, an individual can have many addresses, just as they can have various usernames and passwords. The transaction does not require the use of IP addresses or other identifying information.
Why does that matter when buying diamonds with Bitcoin? The jeweler will still know who you are after all. However, that need be the only person who knows. So, if you would prefer to keep your investment private, choosing to buy diamond with Bitcoin is a great way to do that. 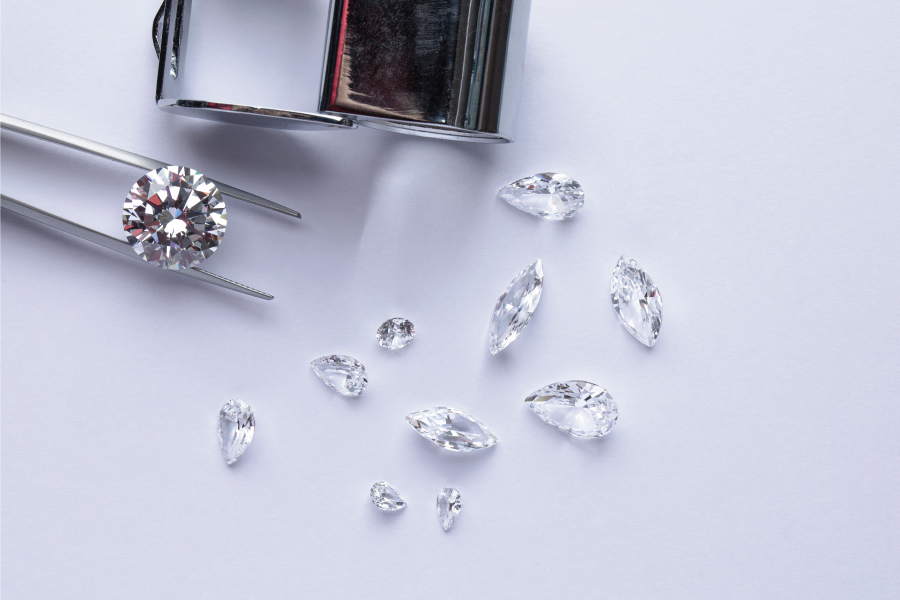 No One Else Can Tell You What to Buy

Bitcoin is a peer-to-peer payment system, which means that users can send and receive payments from anyone on the network anywhere in the world. The participants to a transaction do not need authorization from an external source or authority unless they are sending or receiving bitcoin via a licensed exchange or institution.
This can be a big consideration when buying diamonds. The Internet has made international buying easy, including working with a jeweler to buy diamonds and other precious gemstones. That is, right up until it's time to pay. Banks often put all kinds of limits and restrictions on making larger international payments, leading to a frustrating experience for everyone involved. Bitcoin payments don't come along with those frustrations.

While typical banking fees such as "maker" and "taker" fees, as well as deposit and withdrawal fees, are standard among fiat currency exchanges, Bitcoin users are not subject to the plethora of traditional banking associated costs with fiat currencies. This includes, among other things, no account maintenance or minimum balance fees, no overdraft costs, and no returned deposit penalties.
Fees and currency expenses are also common in standard wire transfers and international transactions. The expenses of transacting with Bitcoin are often much cheaper than those of bank transfers because there are no intermediary entities or governments involved. This is good for the seller as well as the buyer in many cases, as sellers are also often charged fees when receiving payments, especially when it comes to credit and debit cards. And if a diamond seller is going to pay fewer fees, they won't have to build those into their pricing.

How Do You Use Bitcoin to Buy Diamond?

As technical as Bitcoin can sound, paying for goods and services with it is becoming easier everyday. In many cases now it's just another option at the checkout page, and should you wish to use Bitcoin to buy diamonds from us, for example, the process will be very much the same as usual. You'll get the same stunning jewels, the same excellent customer service and the same personal attention. We just won't be asking for your credit card.