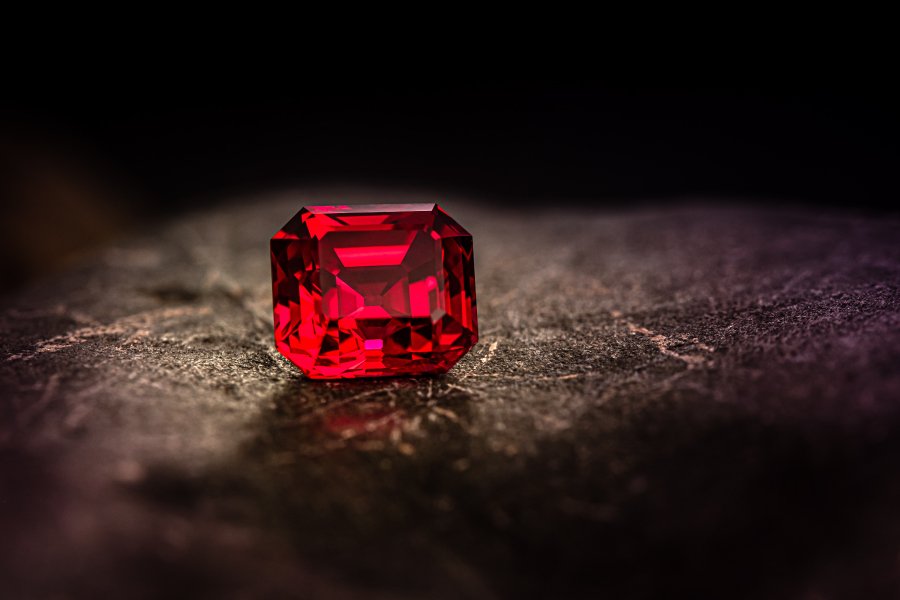 How To Tell A Real Ruby?

Are you planning on buying a ruby? Do you know how to determine genuine ruby? How can you tell if a ruby is genuine or not?
Since ruby is the gemstone linked with monarchy and wisdom, there is no better way to make someone feel like a queen or a king than by giving them one.
Rubies have the potential to be the most valuable coloured gemstone in terms of price per carat. However, there are several fake rubies on the market, and it may be challenging to determine whether a gem is genuine. Finally, and most importantly, the surest approach to determine if its objective is to take the stone to a licensed jeweller.
At home, you can determine the genuineness of a ruby by examining its colour and hardness. Unsurprisingly, ruby is highly wanted, and many will attempt to replicate such a magnificent stone.
This article will help you know about the methods to determine genuine ruby.
Let’s get started.

Natural geological processes created a natural ruby over millions of years. They are generated in natural surroundings, and extracting them requires extensive elements and techniques.
Elements that make up the earth's crust. Natural rubies occur naturally and require no treatment other than being cut and polished. They vary owing to their flaws and contaminants.
A natural ruby is formed of corundum, the same material responsible for creation. Its colours are due to the presence of chromium during the stone's creation, and indeed, ruby is sapphire's red counterpart.
The more chromium in ruby, the more vivid its colour will be.
Given the length of time it takes to form and the fragility of the extraction process, it's unsurprising that genuine rubies are worth far more than manufactured or counterfeit stones.

While synthetic rubies resemble wild rubies, scientists make them in laboratories. Because synthetic rubies have the same physical and chemical structure as natural rubies, they are nevertheless considered authentic.
Laboratory gemstones lack the unnecessary inclusions and impurities frequently seen in real gems. Synthetic rubies are created quickly and consume fewer resources. They are often far cheaper than genuine rubies. It is an excellent, cost-effective solution appropriate for anybody buying on a budget.
While some believe that synthetic stones lack the romance and history of natural stones formed overages, others like the scientific component. 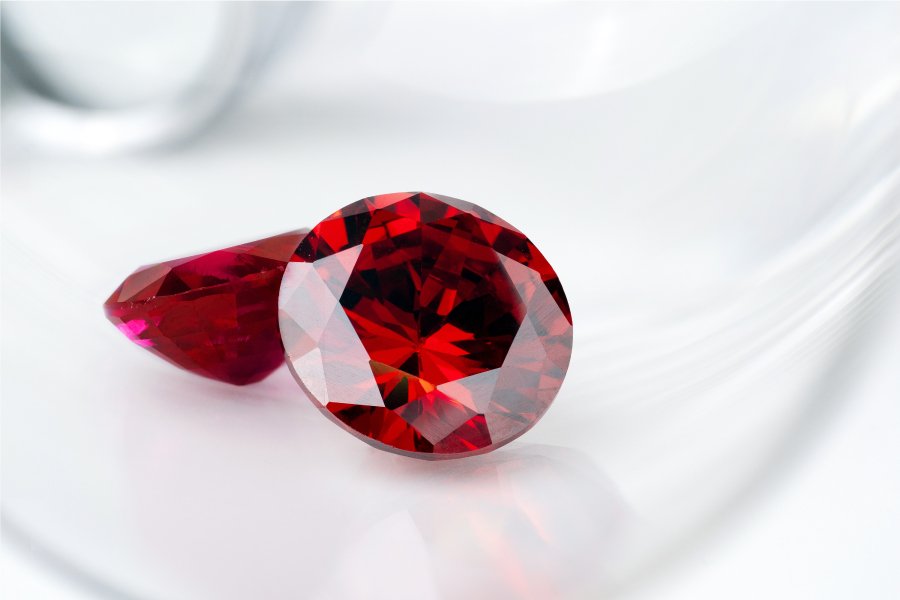 How To Tell If A Ruby Is Real?

Now, we will explain some methods via which you can justify and tell if a ruby is genuine or not.

Rubies are among the toughest gemstones, so they should not be easily scratched.
You should clean the ruby using a moist cloth or a toothbrush to remove any residue or blemishes. Then, using your fingernail, dig into the gemstone to see if you can scratch it. If you can't, it isn't a genuine ruby.
Scratch the ruby with various tools such as a knife, sandpaper, and a piece of glass which are all acceptable methods. If there is no discernible impact following the procedure, the gem is likely genuine.
Drag the ruby across a porcelain plate, and if any colour streaks remain, the ruby is more likely to be another substance. While the absence of a streak is not conclusive proof, the presence of colour indicates that it is not real.

The Gem's Flaws of Ruby

Genuine gemstones originated naturally in caves and beneath the ground as minerals. As a result, minor flaws - a black spot, a line, or an inclusion - are expected inside the stone.
You may inspect these more closely with a 10-power magnification, as the slight faults are challenging to see with the naked eye.
Fake stones are frequently perfect because slight faults inherent in genuine rubies are challenging to replicate. However, you should remember that any imperfection within the stone, except bubbles, is excusable.
Numerous attempts have been made to replicate gemstones using glass materials. As the glass cools, bubbles frequently appear, and as a result, they are excellent.

Examining ruby attentively is one of the simplest methods to verify if it's genuine. Rubies have a rich crimson colour, and the colour of a ruby is frequently referred to as "bright" or "glowy" by many.
Imitation rubies, such as garnet or tourmaline, have a similar hue but can frequently appear dull compared to a natural ruby. 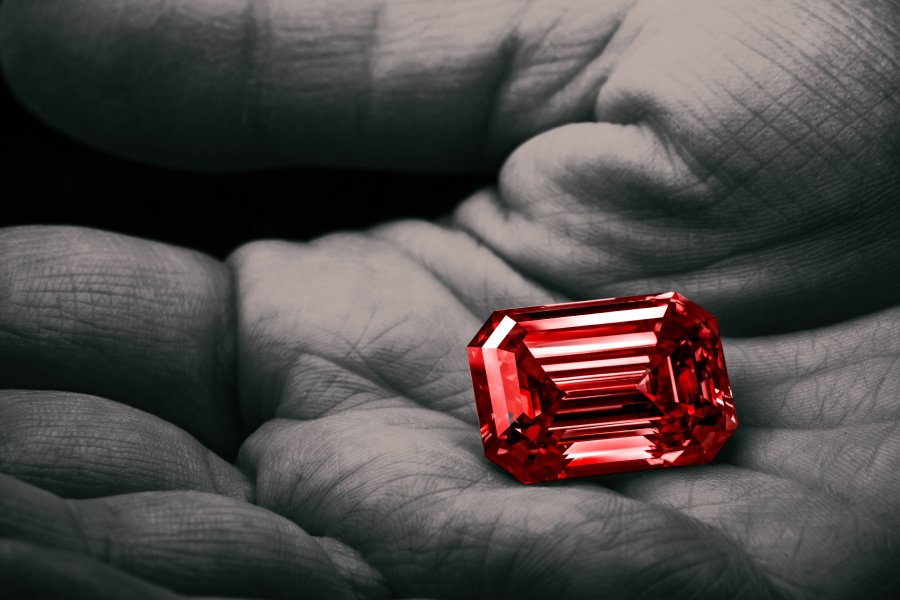 In this test, you will determine whether or not your stone has lost its colour. You can scratch a hard, flat surface, such as a piece of glass, with the ruby. If a strip of red colour remains on the surface, it is a dead giveaway that your stone is fake.
A genuine ruby will never lose its colour in this manner. The disadvantage of this test is that you cannot be sure that the stone is genuine if it leaves no trace of colour. If it does, you can be confident it is not real.

Glass is used to create synthetic rubies. A ruby can never match the glass's colour or tint. Thus, the most straightforward technique to determine if a ruby is genuine is to compare it to a glass of a similar hue. Compare a piece of genuine red glass to the phoney. If the two are identical, the stone is a forgery.

What does a ruby look like when exposed to ultraviolet light?

Additionally, rubies in marble frequently glow red when exposed to UV light-including sunlight's ultraviolet radiation. Fluorescence may intensify the colour of ruby, which can improve its value. Rubies are also discovered in basalt rocks in other regions.

How can you differentiate a garnet from a ruby?

Rubies have a more intense and vivid red hue, whilst garnets seem softer and whiter. Additionally, a ruby may appear somewhat purple, or even blue, to some. However, if the stone's colour is orange or yellow, you're undoubtedly looking at a garnet.

Rubies have the potential to be the most valuable coloured gemstone in terms of price per carat. However, there are several fake rubies on the market, and it may be challenging to determine whether a gem is genuine.
It is much easier to determine whether ruby is genuine when raw and uncut for various reasons-rubies like a flat, hexagonal form for growth. However, if you come across one for which you have no idea of the source, you can use the methods provided in this article to determine.
However, if you feel that your ruby is a fake, you should get a second opinion from a professional gemologist at your nearest jeweller.