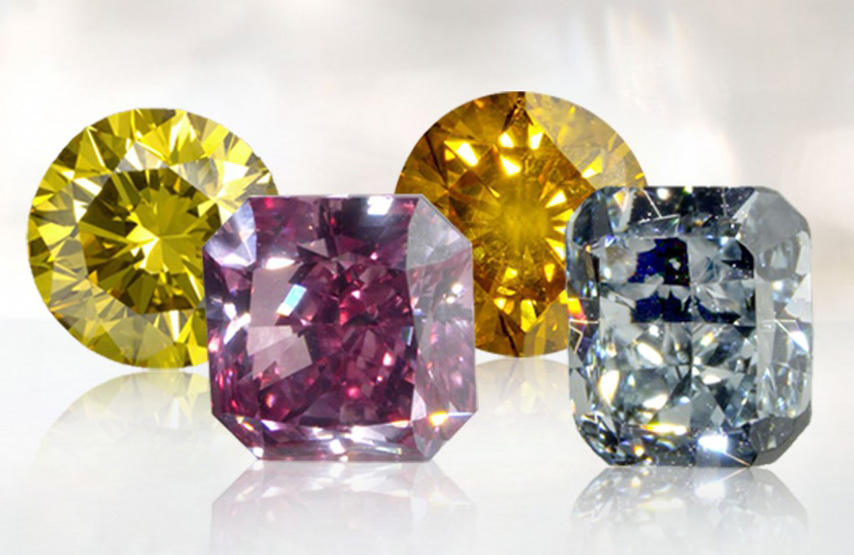 How to Buy Fancy Colored Diamonds

Buying fancy colored diamonds is rather different to buying a 'standard' white, or colorless diamond, especially when it comes to making a choice based upon how the diamond is 'rated'.

Traditionally, diamond buyers have been advised that the four most important things to evaluate are the 'four C's' - cut, color, clarity, and carat weight - and that the first, cut is the most important. And for those looking to buy white or colorless diamonds that is absolutely true. These diamonds are prized most for their radiance and sparkling brilliance and the way a diamond has been cut is what determines this.

However, when it comes to fancy colored diamonds color comes first, every time. The cut is very important still, but only in how it manages to enhance the color. Clarity is also less of a factor as occlusions may actually heighten the diamond's appearance. So it really is all about the color

How the Color of Fancy Colored Diamonds is Graded

The color of a fancy colored diamond is graded according to three standards. Hue - the actual color - as in blue, red, green etc. - tone - how light or dark the color is and saturation, how strong or weak the color is.

The hue of an individual fancy diamond is often described using two, or sometimes more, colors, as that is what it many of them will usually process. Often you'll see these colors written when describing the diamond with the first color used in adjective form and the second as a noun eg: greenish yellow, pinkish brown. Occasionally though the color split is an absolute 50/50, so they will both by listed as nouns eg: Orange Yellow.

Then there are those rarer diamonds that really do only contain one hue. Their color, of course, is listed alone, and these diamonds do tend to be of the highest values in the world of fancy colored diamonds because they are the rarest. For example, according to the GIA, they know of only four pure Fancy red diamonds in the world (so you are not that likely to see one!)

When it comes to color strength, the diamond is graded along a scale that runs from Fancy Light to Fancy Vivid.

To determine the final value, saturation, an expert looks at the distance the color extends from the center of the 'globe' or 'heart of the diamond.

How To Buy Fancy Color Diamonds

As all of this does sound rather confusing to the layperson it stands to reason that it is best to buy fancy colored diamonds with the help of an expert. But where do you find these people - and these gems? In years past, until relatively recently in fact, these gorgeous gems were sold to the public only through the highest end retailers in the world, the likes of Tiffany and Graff.

That is changing though. Now there are a number of excellent online sources of fancy colored diamonds that are far more accessible to people all over the world. The expert help is still there, along with the expert evaluations and advice. It just means that if you live, for example, in London, you don't have to take the concept of breakfast at Tiffany's literally and fly to New York just to buy wonderful fancy colored diamonds.