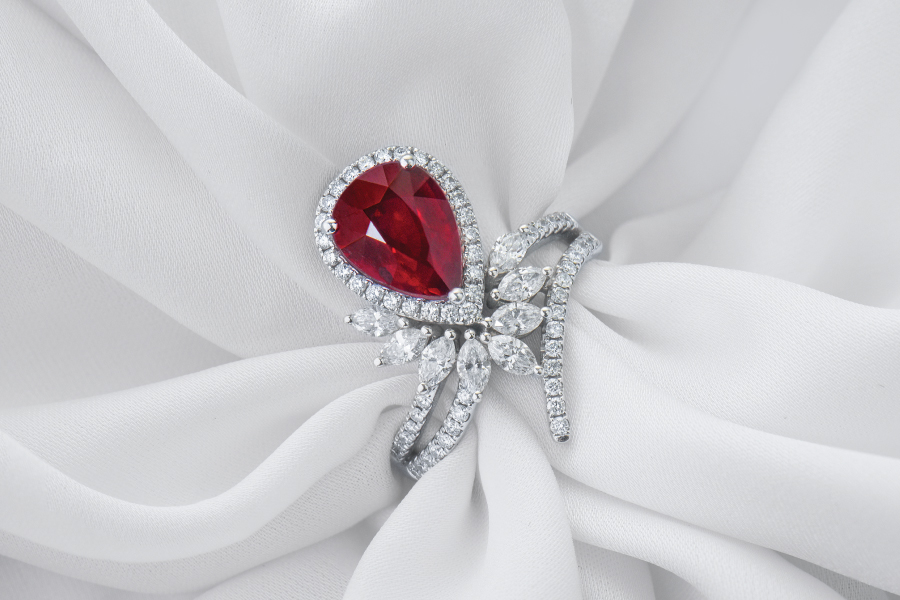 Emeralds vs. Rubies: What You Need to Know

Although, as the song goes, diamonds are a girl's best friend, striking, colorful gemstones like rubies and emeralds are just as beloved and timeless. These precious stones, which are two of the three 'major' gemstones, are renowned not only for their stunning colors, but also for their scarcity and longevity.
Although various factors, such as the famed Four C's, influence the values of rubies and emeralds, rubies often command a greater price per carat than emeralds. But both jewels have historically fetched high prices and are a source of intrigue - and desire - for jewel connoisseurs all around the world.
Take a look at our guide to two of the most well-known precious stones to learn what makes them so remarkable, which rubies and emeralds are the most well-known, and how you should go about shopping for enchanting emerald jewelry, or ravishing ruby pieces, yourself

What are The Physical Differences Between Rubies and Emeralds

Rubies are made from the same mineral type as sapphires and are instantly identified by their vivid red hue. The inclusion of chromium within rubies gives them their characteristic hue. And it's the level of chromium in them that sets their destiny.
Whether you're looking at a lovely green emerald, a spectacular red ruby, or even a stylish blue sapphire, practically all gemstones go through the same process to achieve their hue. Other elements are introduced to gemstones as they develop within the Earth, changing their color.
When titanium and iron are added to the mix during the formation of a sapphire, the stone takes on a beautiful blue tint. A sapphire is made out of corundum, the same mineral that is found in rubies, which are essentially red sapphires. And emeralds, like rubies, get their color from the presence of chromium too.
The coloring process relies on only a few hundredths of a percent of these 'introduced' minerals. There will be no color, for example, if a piece of corundum has less than 0.01 percent titanium
This process, known as charge transfer, is a spectacular natural phenomenon that determines the transfer of an electron from one transition-metal ion to another. To be sure, it's a difficult process to grasp, yet it influences the coloring of any gemstone, including both rubies and emeralds.

Where are Rubies and Emeralds Found?

While rubies have also been discovered in Thailand, Pakistan, and Sri Lanka, Myanmar has long been the most well-known supplier.
Colombia now produces the great majority of the world's emeralds, with some estimates putting the country's supply at 70-90 percent of the global emerald market in the 21st century.
Egyptian emerald mines have a long history in emerald manufacturing, albeit no longer as they were all but abandoned after the superior Colombian emerald was discovered in the 16th century.
It was perhaps with the Ancient Egyptians that the human race's love affair with emeralds began, though, especially as they were Queen Cleopatra's personal favorite (and she could pretty much have whatever gemstones she liked.) and she owned emeralds fashioned into rings, necklaces, bracelets and more. 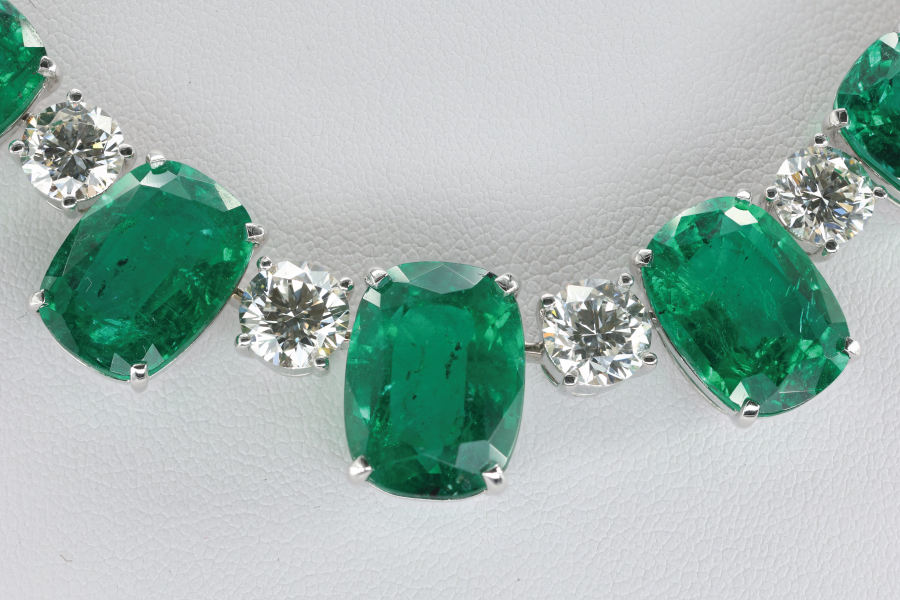 What Criteria are Used to Evaluate Rubies and Emeralds?

Rubies and emeralds, like diamonds, are valued based largely on the Four C's: cut, color, clarity, and carat weight.

Both rubies and emeralds are cut to show off their brilliance and to take advantage of their rough forms' natural shapes. While rubies are most typically cut in cushion or oval shapes, emeralds have their unique cut that is specifically named after them: the emerald cut!
Emeralds especially, however, do have to be cut with the greatest of care and precision, as the natural inclusions that almost every mined emerald will feature to some extent or another, can lead to the gemstone's destruction if it is cut in the wrong way!

One of rubies' most appealing characteristics is their bright red color.
While the color of a ruby can range from almost-pink to dark red, the most precious rubies are known as "pigeon's blood" rubies because of their red-purple colors and brilliance, making them exceptionally uncommon and valuable.
The most valuable emeralds have a color that ranges from blue-green to pure green, with a high color saturation. When most people think of an emerald, they picture that very deep dark green, and while lighter green emeralds have a charm all of their own, it is these darker hued stones that are usually the most sought after.

Rubies and emeralds rarely have perfect clarity because of the way they are produced in nature.
While inclusions are to be expected in these colorful stones, many gemologists also consider them to be part of their allure; the inclusions inside an emerald are even referred to as a "garden"!

The weight of any gemstone is measured in carats, with larger stones having a higher carat.
Larger rubies and emeralds are generally considered to be more valuable, though this is not always the case. 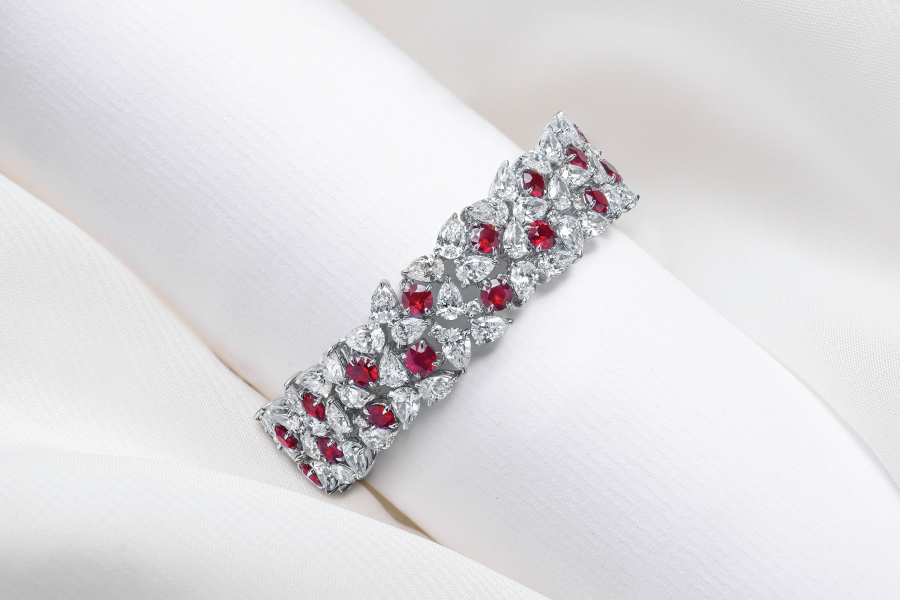 The Most Valuable Rubies and Emeralds

People are typically fascinated by which gemstones are the most valuable of all. The world's most valuable ruby also happens to be the world's most valuable colored gemstone.
In 2015, this record-breaking red gem, known as the Sunrise Ruby, was sold for $30 million to an unidentified buyer at Sotheby's in Geneva.
The Sunrise Ruby was discovered in Myanmar and is a 25.59-carat "pigeon's blood" ruby. It's named after a poem by Rumi, a 13th-century poet.
Two stunning emeralds compete for the title of world's most valuable emerald, however.
The first is Elizabeth Taylor's Bulgari pendant with a 23.46-carat emerald and diamonds, which sold for US$6.6 million in 2011. The second is the 18.04-carat Rockefeller Emerald, which sold for US$5.5 million to Harry Winston in 2017.
Although the total price paid for the Rockefeller Emerald is still less than that paid for the Taylor Emerald, it is significantly more expensive per carat: the Rockefeller Emerald is valued at US$305,000 per carat, whereas the Taylor Emerald was valued at US$280,000 per carat. So technically, you could say it's a draw.

How to Buy Rubies and Emeralds

As is the case for any gemstone, shop carefully! As colored gemstones, rubies and emeralds can be hard for a layperson to even determine as real, and certainly determining their quality is hard to do alone shopping for your perfect emerald jewelry or ruby jewelry piece with a renowned jeweler like Asteria Diamonds is the best way to ensure you get the gorgeous gemstone you want.