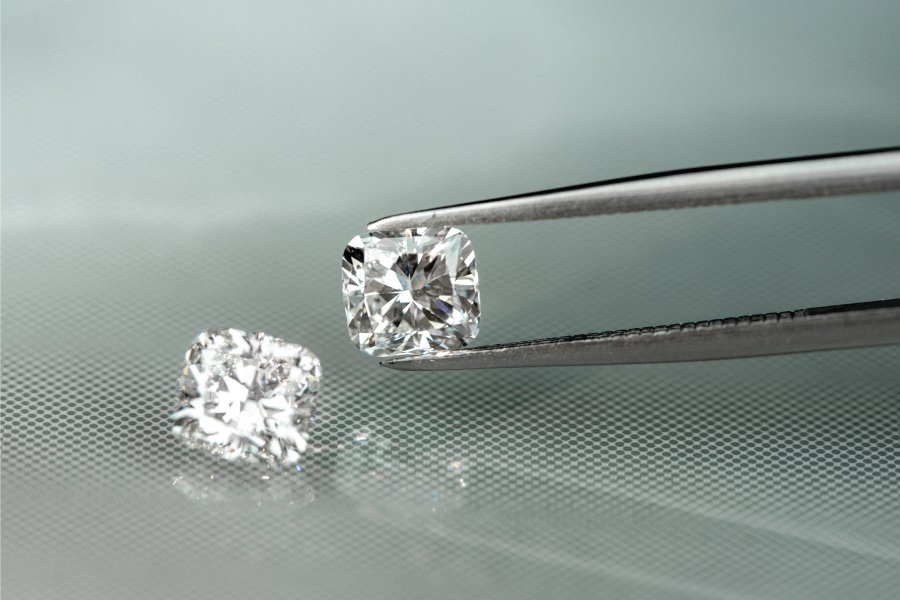 As you will quickly discover when shopping for a diamond engagement ring there are lots of choices and considerations to be kept in mind as you do so. More than many people expect if it's their first time 'ring shopping'. Most experts will advise that the 4 'C's are the most important of these considerations: cut, color, clarity and carat weight.
A diamond's cut is crucial not just to its overall appearance, but also to its durability and perhaps its suitability for individual wear. However, when comparing diamond engagement rings, cut can be a confusing concept, especially if, at a first, brief glance, two cuts appear to be fairly similar.
This is true of two very popular diamond cuts: cushion cut diamonds and Asscher cut diamonds. However, these are two very different cuts, as you'll discover if you read on.

What is a Cushion Cut?

The cushion cut, as the name implies, is a soft square or rectangular form with curved corners that resembles a cushion. The current definition of a cushion cut has evolved through time as diamond cutting and cleaving techniques have improved, but it has its roots in one of the oldest diamond cuts of all.
In the 19th century, a very similarly shaped diamond cut was the de facto shape most jewelers cut most diamonds and gemstones into. It was known simply as the mine cut, and later, the old mine cut.
The cushion cut is a blend of the classic old mine cut with the round brilliant facet design, usually with 58 facets. It comes in a variety of forms, each with its own number of facets, arrangement, and shape. Some cushion cut diamonds have more brilliance than others due to these differences. Cushion cut diamonds have less brilliance than round cut diamonds, but they generally have more fire, which is why some buyers prefer them.

What is an Asscher Cut?

The Asscher cut gets its name from the I.J. Asscher Diamond Company, which was founded by Joseph Isaac Asscher in Holland in 1854.
Joseph Isaac Asscher, the founder's grandson, invented the Asscher cut in 1902. This was the world's first patented diamond cut that was guaranteed not to be duplicated. Until World War II, the Asscher Diamond Company had an exclusive patent and had extraordinarily strong international sales, particularly during the Art Deco period. One of the reasons why Asscher cut diamonds are often considered antique or vintage in appearance is because of their popularity peak in the 1920s.
Although the Asscher cut resembles the square emerald cut, Joseph Asscher altered some criteria, resulting in Asscher cut diamonds with greater brilliance than emerald cut diamonds. Larger step facets, a smaller table, and a taller crown are among these characteristics, resulting in a signature look and increased carat weight.
The Asscher cut diamond has 58 step-cut facets and an octagonal square form, with a length-to-width ratio of 1 to 1.04.
After falling out of favor in the later half of the twentieth century, Edward and Joop Asscher improved the Asscher cut in 1999 and offered it to the world as the Royal Asscher cut.
The Royal Asscher cut was designed utilizing modern cutting processes and contains 74 beautifully symmetrical step-cut facets, preserving the trademark appearance and brilliance. 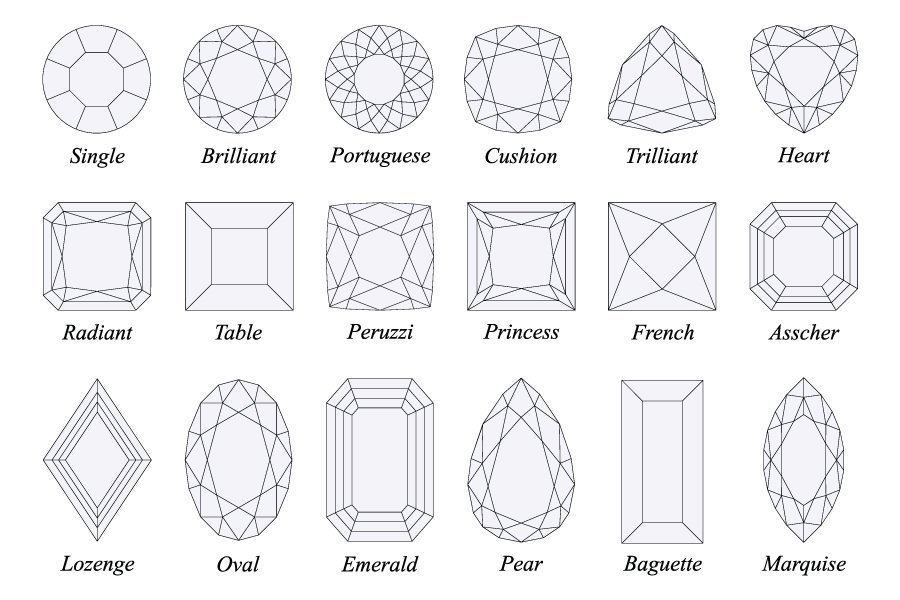 As we mentioned, to some the two diamond cuts may seem to be fairly similar, but there are significant differences:

Cushion and Asscher cut diamonds, like many other diamond cuts, may appear identical at first glance. However, a closer examination reveals the difference in design.
Cushion cut diamonds have slightly rounded, curving sides that resemble a pillow. Asscher cut diamonds, on the other hand, have cropped corners that are normally at a 45° angle, lending them an angular shape.
Asscher cut diamonds are always square. Cushion diamonds can have a square or elongated form, depending on their length to width ratio. They can obviously differ visibly in size, but nearly never in shape.

The way cushion and Asscher diamonds are cut is one of the most significant variances. The cushion cut diamond is part of the brilliant-cut family, whereas the Asscher cut diamond is part of the step-cut family, which means they have a different face-up outline.
Parallel facets give the step cut stones a clean and streamlined appearance, making it much easier to see their patterning. As a result, choosing Asscher cut diamonds with higher clarity and color grades is critical.
The brilliant-cut stones, on the other hand, have greater fire, brilliance, and scintillation, but their facet pattern is difficult to identify for the inexperienced eye.

The facets of a cushion cut diamond, which is part of the brilliant-cut family, are positioned to maximize the diamond's brilliance and shine. Facets are not cut with this objective in mind in classic Asscher cut diamonds. They are cut to showcase the clarity of the stone, but they also feature wider and more dramatic light flashes, that fire that can be so very striking.
When comparing the brilliance and sparkle of these two cuts, the cushion cut will have greater brilliance and sparkle than the Asscher cut.
It's worth noting that not all cushion cut diamonds are created equal when it comes to brightness. The sparkle of traditional cushion cut stones is weaker than that of modified variants. The same can be said about the Royal Asscher cut, which has a higher number of facets and therefore more brilliance.

Because of the difference in brightness between the Asscher and cushion cuts, their defects are visible differently. Cushion cut diamonds have less visible inclusions than Asscher cut diamonds of the same clarity grade because they sparkle more. As a result, if you're thinking about buying an Asscher cut diamond, you should pay very close attention to the amount and placement of its inclusions.
We admit that this may all sound rather overwhelming, which is why it never hurts to ask for advice, and education, from a jeweler when shopping. At Astteria, for example, we will happily answer as many questions as you have, as we know the importance of a diamond engagement ring purchase, and, just like you, we want to make sure you get it right!