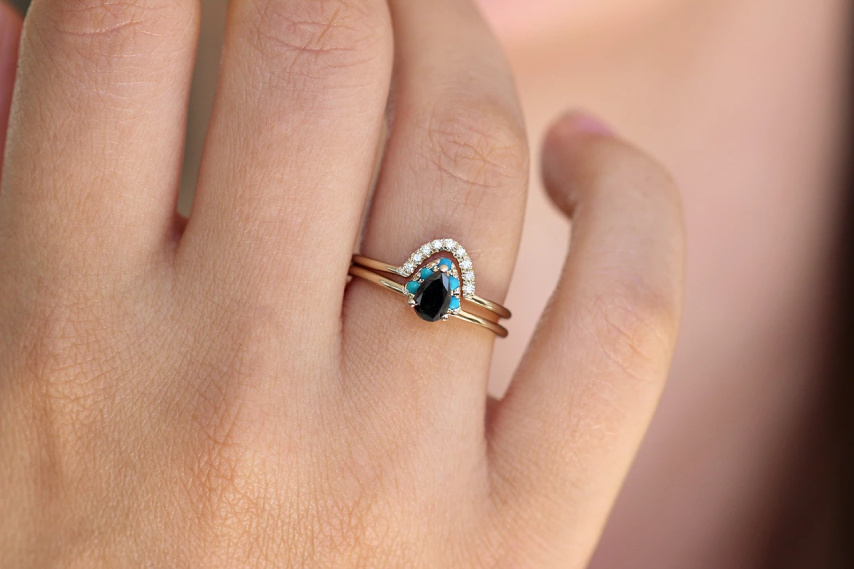 There was a time when black diamonds - and black diamond rings - were considered suitable only for witches, edgy rock stars and emo brides. More recently though the idea of a black diamond ring has become a little more mainstream, and could even be said to have become something of a trend.

When the likes of tattoo artists and make up maven Kat Von D and often edgy actress Carmen Electra chose black diamond engagement rings a decade ago, it only cemented their reputation as cool but 'witchy, rather than a mainstream choice. But then came the second 'Sex and the City' movie.

For as long as 'Sex and the City' ran, both on television and in cinemas, Sarah Jessica Parker's Carrie Bradshaw was help up as a style icon for real world fashionistas everywhere. So when the second film ended (spoiler alert!) with Mr Big presenting Carrie with a black diamond engagement ring "because you're not like anyone else" the idea of a black diamond became one that appealed to mainstream fashion fans and moved it out of the realm of the gothic.

Although they are becoming a more popular choice, a black diamond ring is still a rather bold choice. And often a misunderstood one, as there are lots of people who really don't know where black diamonds come from, what they might signify and even if they are real. To address that we're going to try to clear up some of the misconceptions here.

Where Do Black Diamonds Come From?

If you know anything about the geology of the diamond, you know that are diamonds, fancy colored or white, are formed in kimberlite (a type of volcanic rock) And that's true, except for black diamonds.

Black diamonds have only ever been mined from two areas, Brazil and The Central African Republic. That in itself is not odd, many diamond types are only found in certain areas. What is odd however is that where black diamonds have been discovered there has not been a trace of kimberlite.

So where did they come from? Believe it or not, the most popular theory is outer space. It's not a theory held by YouTube conspiracy theory pundits either, it's the considered opinion of serious scientists.

Most geologists agree that it is likely that young, just forming black diamonds fell to Earth when they detached from a supernova as it exploded. The chemical makeup of the black diamond is unlike any other. It comprises dozens and dozens of tiny crystals instead of just one (the norm for other diamonds) and that only increase the likelihood that the supernova theory is right.

The black diamond is not a modern discovery. The first mention of them comes in medieval times, but it was not until the Age of Exploration dawned in the 17th century that they made their way to Europe.

Once there, they were not unduly particularly prized for jewelry. A black diamond is hard to cut and women were more than a little suspicious of this odd, dark jewel. The exception to that was in Italy, where a belief that a black diamond could revitalize a struggling marriage made them a popular gift for long married husbands to present to their wife (just like in Sex and the City.)

Given that they are becoming more popular, especially among those looking for their own symbol of how special a bride is, shopping for black diamond rings carefully is a must.

Black diamonds are rare, as is the case for all fancy colored diamonds. That means that there are fake black diamonds out there.

Most 'fake blacks' are created by heating or irradiating a low quality white diamond. Technically it's still a diamond, but not a real black diamond and not a high quality stone.

If you are interested in black diamond rings the only way to be sure that you are considering the real thing is to check its GIA certification. Before you get to that stage though ask for it to be held up to the light. A real black diamond will only 'glow' black, while an altered white diamond will display more colours.