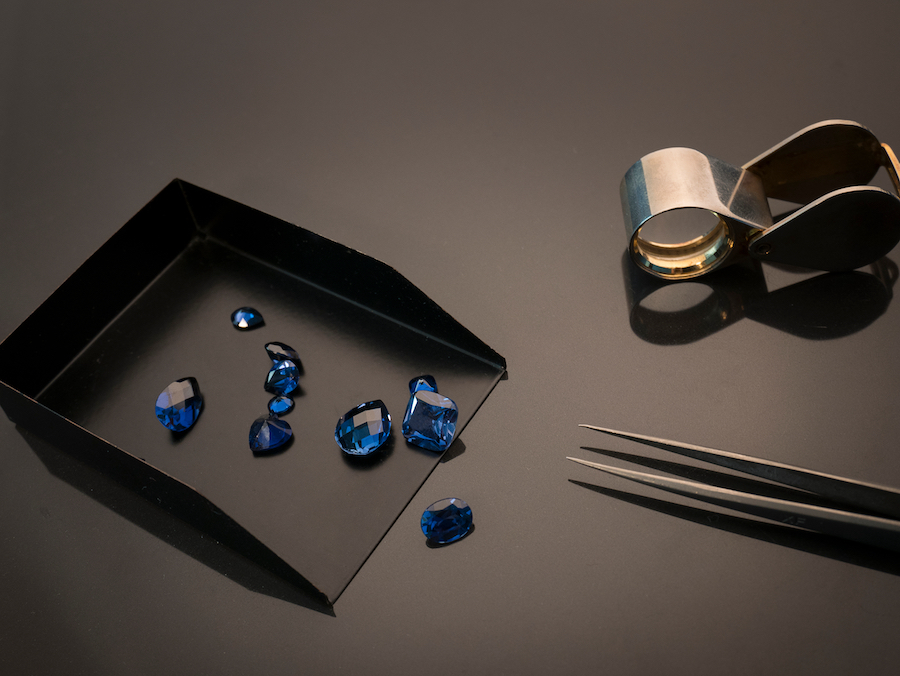 10 Most Valuable Gemstones in the World

Brilliant and beautiful, every gemstone has value, especially to the owners. But have you ever wondered which of the many beautiful sparklers Mother Nature has gifted the world with are the most valuable?

Tanzanite is a beautiful gemstone to look at. Its deep violet hues are distinctly different from the blues of a sapphire and it has an air of mystery that makes it a wonderful choice when creating statement piece jewelry.

As you may have guessed from its name Tanzanite is only found in one location; the foothills of Mount Kilimanjaro in Northern Tanzania. At the moment at $1,200per carat Tanzanite is something of a bargain in the gemstone world but that is expected to change as the supply dwindles.

Fifty years of mining this stunning gem - it was first discovered in 1967 - have left the mountain with very few gems to give, so the value, and price of Tanzanite is expected to rise significantly over the next ten years.

Dark and mysterious, the black opal is very different to its lighter, white and fiery sibling. And more expensive. The black opal is also only found in a single region of the world, in this case the Lightning Ridge are of New South Wales in Australia.

The largest, and most valuable black opal in the world, a gemstone known as 'the Royal One' weighs in at a huge 306 carats and is valued at just over $3 million. It was discovered by a miner who kept it a secret, hidden in his home, for fourteen years before he decided to part with it.

The price quoted for red beryl only applies if you can actually find it for sale. From the same family of gemstones as the emerald miners have only ever found the red beryl in certain areas of Utah, New Mexico and Northern Mexico and they mined the only gemstone quality stones in the Wah-Wah Mountains of Utah.

Gemstone quality red beryl has a dark pink hue and is commonly found with inclusions, but is so rare that when a fine example surfaces it gains value quickly.

Australia is a treasure trove of rare gemstones and musgravite is another excellent example.

The first gemstone quality example of this olive grey gemstone was discovered in 1967, in the Musgrave region for which it is named. Since then only eight more have been discovered, so the price is an expert's estimate, as very few of these very unusual gemstones have ever made it to the market.

A gemstone that changes colours? That's exactly what Alexandrite is. It, depending on the light and temperature, this gemstone may appear to be pink, or it may look more like an emerald and take on a green tinge. This short video from the Official GIA explains the scientific reasons why:

The majority of these fascinating gemstones are mined in Russia, but they have also been found in India, Sri Lanka and Tanzania. The largest example of an Alexandrite stone found to date can be found in the US, at the Smithsonian Institute and is a whopping 65.08 carat gem valued at over $4 million.

Emerald are some of the most popular gemstones in the world, and not only do they enchant women looking for fine gemstone jewelry but they have become a big favorite among men as well. Emeralds have been found all over the world, but most of the world's supply of this green stunner comes from Zambia, Zimbabwe, Brazil and Columbia.

The problem with emeralds is that most have at least minor imperfection, so when a flawless natural emerald does come up for sale it can be sold for a mind-blowing price. Case in point; the Rockefeller Emerald. John D. Rockefeller purchased for his wife. Years after the death of the couple their son put it up for auction at Christie's, where it commanded $5.5 million, or $305,000 per carat.

Rubies are stunningly beautiful but can range from pink to a deep dark red and are usually considered being gemstones that represent passion and energy.

The most expensive ruby to ever come to auction is 'The Sunrise Ruby'. This 26 carat gem, which is close to being a perfect red, was mined in Myanmar and is named for a poem written by the 13th century poet Rumi. At auction it fetched $30 million, an astonishing price for a ruby that has yet to be topped.

All colored diamonds are rare, but the pink diamond is among the rarest of all and thanks to the fact that the world's primary source of pink diamonds, the Argyle Mine is Australia, is now depleted they are expected to become even rarer and even more valuable.

When flawless pink diamonds do make it to auction they routinely fetch great prices, often breaking the 1 million dollars per carat mark. The largest pink diamond that's graded flawless by the Gemological Institute of America is the 'Pink Star'. It weighs 59.60 carats and was most recently sold at Sotheby's Hong Kong for $71.2 million, or $1.19 million per carat.

Of all the stunning gemstones in the jade family jadeite is considered the most vivid, the purest and, as you might imagine, the rarest. It is found in several different colors, including red, yellow and black, but green is the most common hue.

The most sought after example of the legendary gemstone, which has been a part of Chinese lore since ancient times, is a semi transparent green gemstone known as Imperial Jade.

In 2014 a necklace containing 27 beads of this precious gem, which was formerly owned by American heiress Barbara Hutton was offered at auction and attracted a slew of wealthy would be buyers. When the hammer fell however, it was returned to its first home, Cartier, the company who had designed it, for $27.44 million.

The stunning blue diamond is arguably the most prized of all precious gemstones. A flawless example is so rare that whenever one comes to auction it causes a huge stir in the jewelry world.

One fine example of this was the sale of the “The Oppenheimer Blue” in 2016. This stunning 14.62 fancy colored diamond was sold by Christie's Geneva for $57.5 million, which breaks down to $3.93 million per carat.